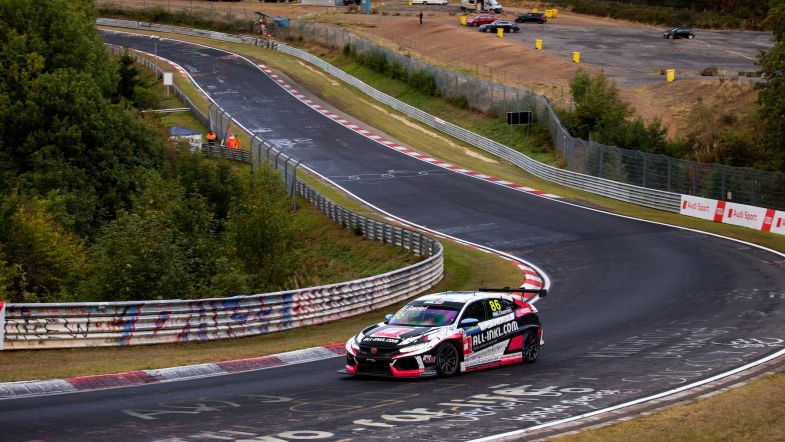 Esteban Guerrieri produced a controlled drive in tricky conditions to secure victory in the opening race of the weekend at the Nürburgring.

With drivers facing wet conditions for the first time this week, drivers completed two laps of the Grand Prix circuit behind the safety car before the racing action got underway, with heavy rain being reported out on the Nordschleife.

With the action getting underway with a rolling start, Muller held the lead from Guerrieri and Coronel as the field turned left into the Hatzenbach – with conditions immediately worsening once drivers headed under the trees.

Heading into Aremberg for the first time, Guerrieri saw a chance to make a move for the lead and put his Honda on the outside of Muller’s Lynk & Co; going round the Frenchman to secure first spot with the briefest of contact between the two as the cars struggled for grip.

Guerrieri, who had sampled the wet circuit in Thursday evenings Nürburgring 24H session, quickly set about trying to break away at the front, with Muller unable to relax thanks to the fact that he had the Coronel’s Audi close behind.

Having broken the tow, Guerrieri led down the Döttinger Höhe for the first time to hold a lead of just over three seconds over Muller with Coronel, Thed Björk and Yann Ehrlacher close behind.

Attila Tassi rounded out the top six in the second of the Hondas having had a brief run off track on the Grand Prix circuit, with qualifying pacesetter Nestor Girolami and Gilles Magnus completing the top eight.

Muller was able to edge ahead of Coronel around the Grand Prix circuit at the start of lap two as the Dutch driver was forced to contend with ever increasing levels of pressure from Björk behind.

Coronel managed to edge out a slender lead over the Lynk & Co before Björk closed back in – coming close to what could have been a huge moment when he briefly touched the grass.

As Guerrieri continued to pull away, Muller returned to the Döttinger Höhe having broken the tow to Coronel, who managed to keep Björk and Ehrlacher behind despite the Lynk & Co being quicker.

The move would soon arrive however as going in to turn one at the start of the final lap, Björk went around the outside of Coronel, with contact between the pair allowing Ehrlacher to also clear the Audi and move up into fourth.

With the top two positions seemingly set, the focus was firmly on the battle for third, with Ehrlacher all over the back of Björk through the first two sectors before the Swede was able to pull our a small gap in sector three.

Guerrieri duly took the race win from Muller, with Ehrlacher making his move for third on the Döttinger Höhe to find a way ahead of Björk. The pair had closed in on Muller ahead through sector four, with the three Lynk & Co drivers taking the flag in formation.

Despite reporting a driveshaft issue, Coronel took the flag in fifth spot with Girolami moving up into the top six on the final tour when Tassi put his Honda into the barriers and ripped off a wheel.

Magnus took seventh ahead of Tiago Monteiro and Jean-Karl Vernay, with Bence Boldizs breaking into the top ten for the first time.

Tassi wasn’t the only driver to run into issues on the final lap as Santiago Urrutia stopped in sector four after going off from sixth spot and failed to make it to the finish.

Jack Young’s tricky weekend saw him go off into the barriers on the opening lap in the Vukovic Motorsport Renault Megane, whilst the new Cupra León Competición of Mikel Azcona ground to a halt with steam coming from under the bonnet at the Karussell.

Nathanael Berthon, who had been due to start from pole before a raft of penalties were applied after qualifying, started from the pits after a technical issue on his Audi but quickly returned to the pits after a run around the Grand Prix loop.

The Frenchman would eventually return to the track but well behind the rest of the field, and ended up P12 behind Gábor Kismarty-Lechner.