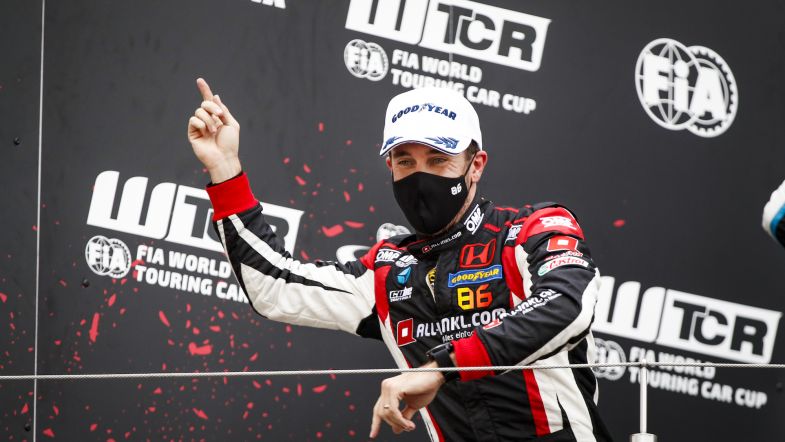 Esteban Guerrieri: “It’s mega to win at the Nordschleife again”

Esteban Guerrieri said he was pleased to secure his first win of the 2020 World Touring Car Cup season after a controlled drive in the opening race of the weekend at the Nürburgring.

The Honda driver had started from second on the grid by virtue of a raft of penalties that were handed out after Thursday’s qualifying session but wasted little time in making a move for the lead as he went around the outside of Yvan Muller in tricky conditions at Aremberg.

Once ahead, the Münnich Motorsport driver was able to control the race from the front, ensuring that he had broken the two over Muller by the time he hit the Döttinger Höhe for the first time and then edging further clear on lap two.

That meant that even though he backed off on the final lap as a result of a vibration on his Civic Type R, Guerrieri was able to celebrate victory by just over three seconds for his first win of the year – making up ground in the points standings after his trying opening weekend at Zolder.

“It’s never easy at this track and there are so many things that can hurt you,” he said. “You have to strike a balance between being confident and being too confident. At the start, I was following behind Yvan and I had an idea of where the grip might be.

“The move was a risky one but I saw Yvan brake a little earlier and I knew there would be more grip around the outside. We went side-by-side out of the corner and then I got ahead on the run down the hill. I pushed to build a gap because the Lynk & Co is quick in the straights and it was a crazy first lap as I went on the grass and also clipped a kerb.

“However, I was able to get the gap and then with the experience I had of the first lap and the gap I had built, I could control it and it is mega to win at the Nordschleife again.”

Guerrieri’s only concern had come on the final lap as he had to deal with a vibration, having suffered with tyre issues in practice on Thursday.

“I was afraid about the tyres as had two punctures yesterday and don’t know what the cause of one of them was,” he admitted. “There was some vibrations on the final lap and I took it a bit easier, even easing off on the Döttinger Höhe because it was getting worse. We expect it to be wet again tomorrow so we have a reference to work from now.”