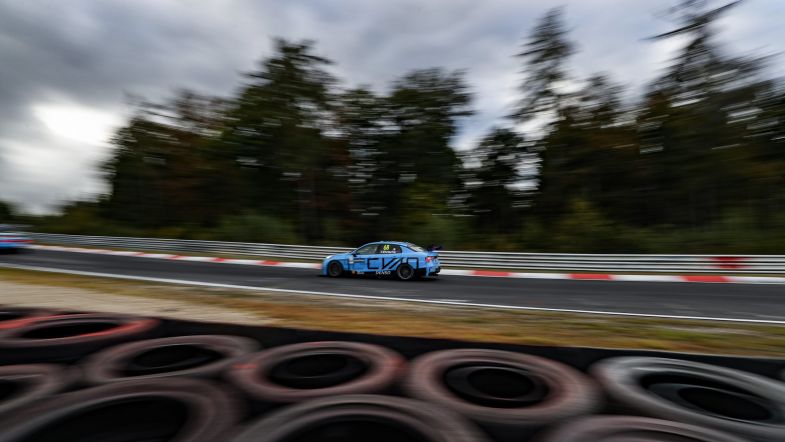 Yann Ehrlacher extended his lead in the World Touring Car Cup standings with a controlled drive to victory in the second race of the weekend at the Nürburgring.

As was the case in race one, the action started behind the safety car on the Grand Prix circuit before the race got underway with Nestor Girolami retaining his lead through turn one ahead of Ehrlacher and Atilla Tassi slotting into third as the field headed onto the Nordschleife.

Fresh from his fifth place finish in race one, Tom Coronel hit trouble on the opening lap when he ran wide across the gravel at Aremberg and slipped behind both race one winner Esteban Guerrieri and the Cupra of Mikel Azcona into seventh.

As Girolami and Ehrlacher started to edge away at the front, Tassi was coming under pressure from Thed Björk, whilst Guerrieri ran off across the grass whilst trying to close in on the pair ahead.

Heading along the Döttinger Höhe for the first time, Ehrlacher was close enough to get a tow from Girolami and move into the lead of the race, with Björk then making a move for third going through the opening corners on the Grand Prix loop to put his Lynk & Co into the podium positions.

Guerrieri had broken away from Azcona despite his trip across the grass, with Coronel remaining in seventh ahead of Jean-Karl Vernay’s Alfa Romeo and Yvan Muller’s Lynk & Co.

There was drama at the start of the second lap when Gilles Magnus went off into the barriers in sector two in his Audi with the battle for the lead then taking a twist when Girolami was handed a 30 second time penalty for a starting infringement.

Although informed of the penalty by his team, Ehrlacher was able to edge clear of the Honda, with Björk moving ahead of Giriolami on the road going down the Döttinger Höhe in a move similar to the one that Erhlacher had made on lap one.

The only other moves for position saw Vernay get ahead of Coronel into seventh spot, with Muller then following his fellow Frenchman through on the Grand Prix circuit.

Further back, Santiago Urrutia cleared the Audi of Nathanael Berthon to take eleventh but faced a busy final lap if he was to haul in Tiago Monteiro for a top ten finish.

With Ehrlacher clear out front from Björk, and Girolami’s penalty taking him out of the equation in the podium fight, the main focus on the final lap was on the battle between Guerrieri and Azcona for what would become fourth spot, and between Vernay and Muller for sixth.

Ehrlacher duly wrapped up victory in worsening conditions on the final lap ahead of Björk for a Lynk & Co 1-2, with Girolami staying ahead of Tassi on the run to the line before his penalty dropped him down to eleventh spot.

The fight for fourth went the way of Azcona as he managed to get ahead of Guerrieri right at the end to snare the place by two-tenths of a second, but Vernay held off Muller for sixth spot.

Coronel would end up eighth having been unable to replicated his strong run in race one, with Monteiro and Urrutia rounding out the top ten.

Ehrlacher now leads the standings by 31 points over Girolami, with Björk level on points with the Honda driver and Muller one spot further back.