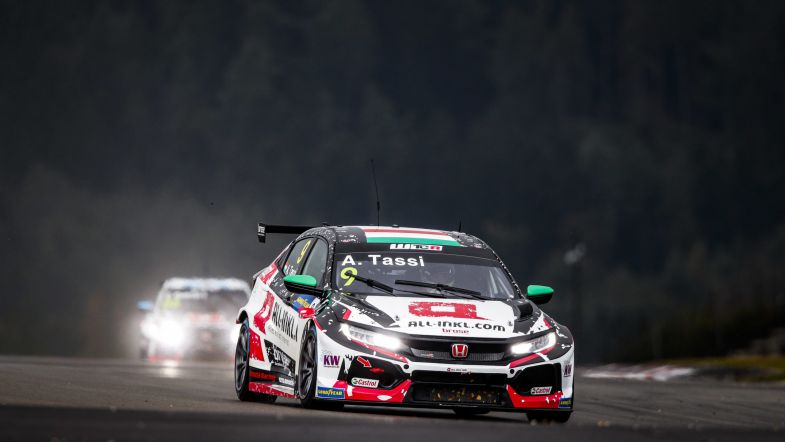 Attila Tassi said he was delighted to repay the Münnich Motorsport team for the hard work that had gone into repairing his Honda Civic Type-R TCR after picking up a podium finish in the second WTCR race at the Nürburgring.

Tassi, who had shown strong pace through Thursday’s free practice sessions, saw his opening race end in disappointing fashion when he was forced to retire after contact from the Lynk & Co of Santi Urrutia.

With heavy damage to the car repaired overnight, Tassi started the second race from third on the grid but would lose a place the end of the opening lap when Thed Björk got ahead on the Döttinger Höhe.

When Björk then got ahead of Nestor Girolami, Tassi closed onto the rear of his fellow Honda man and inherited third at the flag as result of Girolami’s 30 second time penalty.

It means two podiums from the two opening meetings for Tassi, who sits seventh in the standings as a result.

“We lost a lot of points in race one, and what happened was not our mistake,” he said. “That was a shame but this podium is good compensation and two podiums in two race weekends compared to last year is a big improvement.

“All in all I was very happy with my performance. I made a bit of a mistake at the start of lap two and that allowed one of the Lynk & Cos to undercut me, but I was happy that I could still put pressure on after that. On the last lap when I was following Nestor I just tried to be cautious because I knew he had penalty and there was a big gap behind.

“I went for the optimum result for the ALL-INKL.DE Münnich Motorsport guys – they did an awesome job to repair the car overnight, so I’m glad for them that I could repay their work with this result.”