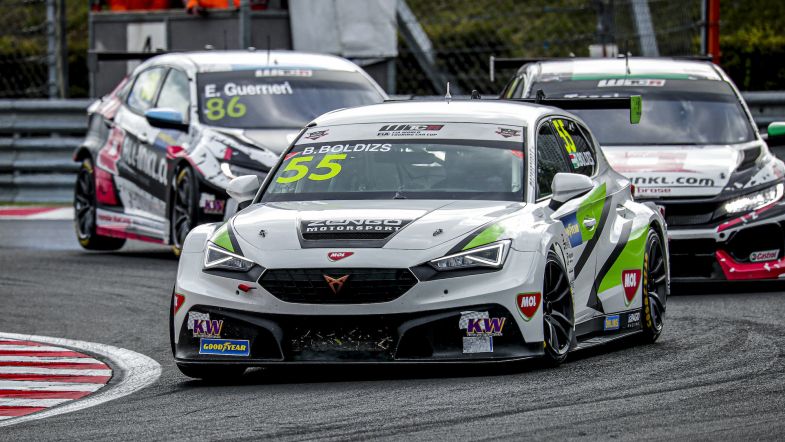 Youngster Bence Boldizs insisted that he would remember his home World Touring Car Cup debut “forever” after his best weekend to date in the series at the Hungaroring.

The Zengő Motorsport driver kicked off race day with 16th place in the opening race of the weekend, but his moment in the limelight would come in race two, where he started from pole having been tenth on the times in Q2 on Saturday.

Although he lost the lead at the start in his Cupra León Competición TCR, Boldizs was able to run inside the top ten throughout the race, going wheel-to-wheel on track with Norbert Michelisz and Esteban Guerrieri.

The teenager would eventually take the flag in seventh spot before being promoted a place into sixth when Nathanaël Berthon was handed a time penalty for making contact with the Cupra in the early stages.

Boldizs ended the weekend outside the points in race three, but he was still delighted having taken his personal best result at his home circuit.

“I don’t know what to say,” he admitted. “Of course it feels amazing to be have been on pole with Yann [Ehrlacher] and Yvan [Muller] behind me. I didn’t get the best start as it is really hard to start these cars and I need to learn more, but the pace was there.

“I was racing with Norbi and Esteban in the race and it felt amazing to be between two legendary drivers – and one of those is my idol. I was able to try and challenge Norbi and managed to defend from Esteban for four or five laps towards the end. I’ll remember this forever.”