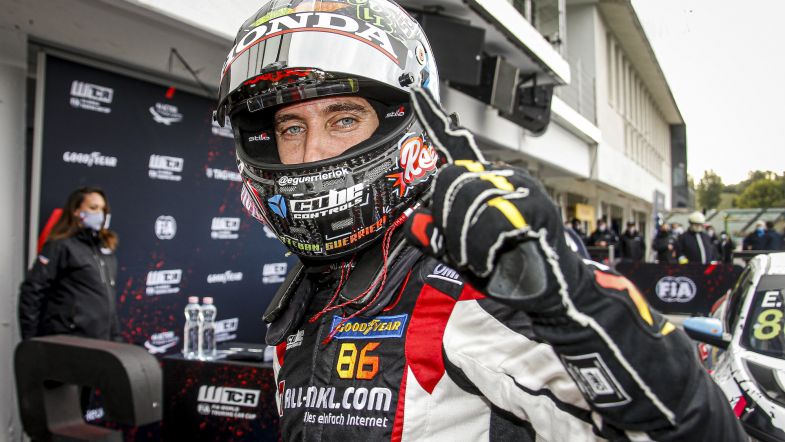 Esteban Guerrieri was full of praise for the Münnich Motorsport team after a double win at the Hungaroring brought him right into contention for the World Touring Car Cup title.

The Argentine driver was the man to beat across Saturday as he paced free practice and then secured a double pole in his Honda Civic Type R, and then produced a fine drive in the opening race to take his second win of the campaign.

Guerrieri was unable to relax from start-to-finish however thanks to intense pressure from behind from points leader Yann Ehrlacher, with the pair ending up just half a second apart by the time the chequered flag dropped.

“I just tried to manage the first laps which was really hard in such cold conditions because the rear tyres were really cold, so I was just dancing around – but I think we all were,” he said. “After two or three laps, I realise what Yann’s pace was and in which corners he was strong, and I just tried to cover that. Our car worked pretty well and obviously I’m really pleased with the 25 points.”

Whilst Ehrlacher then won race two to extend his lead, Guerrieri – who finished seventh in race two – was able to take his second victory of the weekend having once again led from start-to-finish at the head of a Honda 1-2-3.

That was despite struggling with the handling of his car from the early stages of the race, which would prove to be a legacy of having run off track on the opening lap of race two whilst avoiding the clash ahead between team-mate Néstor Girolami and the Cupra of Mikel Azcona.

“On the way to the grid, I felt something was wrong and the team checked it all and it seemed okay,” he said. “However, when I gained more speed, the car was shaking more. The wheel cover started to disintegrate and the splitter was moving as it had no support, so it was more difficult and the aero balance was disturbed; the car was all over the place.

“I tried to push as much as I could but I also didn’t have to defend as much. I have to thank my friends and team-mates for their help for the result and I’m happy to share podium with them. The whole team has done a great job this weekend.”

Guerrieri now sits 22 points behind Ehrlacher in the standings but admitted it could be a tough weekend of the Hondas next time out at Aragon.

“We have been to Aragon but it was wet all the time and it was our first test with the new tyres,” he said. “It was quite useful but I think it will be difficult to be competitive there compared to the Lynk & Co, which are our main rivals until the end of the season.

“A bit more rain would be good when we go there, and the compensation weight will be also be against us. In the next few days, we’ll decide on the strategy we need to take, and how to extract our potential.”