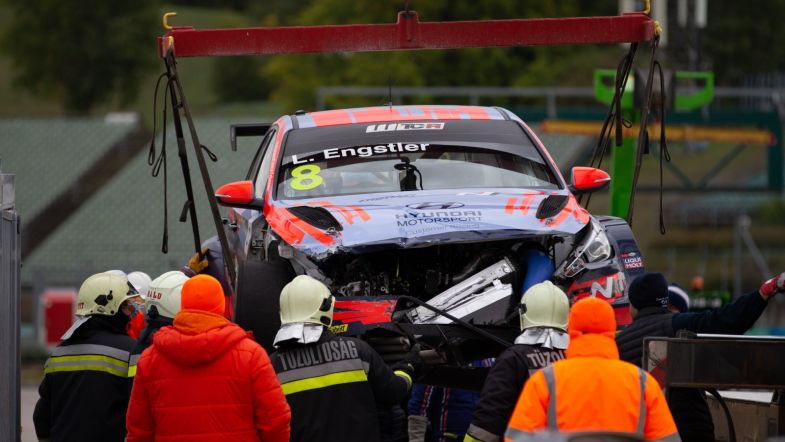 Luca Engstler crashed hard after a clash with Tom Coronel in the second World Touring Car Cup race at the Hungaroring, leaving Team Engstler in a race against time to get his car ready for the final race.

“I’m really sorry for the guys, because it’s a lot of work. It’s not looking good very good but we have to try,” said Engstler.

The Hyundai i30 N TCR driver started 12th and was involved in a fight with Coronel. The two made contact when Engstler defended his position, an incident that Coronel received a drive-through penalty for.

“I don’t know what happened, I got a big hit and I spun around,” said Engstler.

“I don’t want to say something now, because I first want to analyse what happened. The feeling was definitely bad. I went straight into the wall.”

Engstler’s car was damaged prior to the incident after the first lap chaos.

“I don’t know what to say. The start was difficult, a huge amount of crashes ahead of me,” said Engstler.

“Straight away the front-right corner was bent, so I was dropping back. Then I got another hit in the back. So the front-right and rear-left was broken. The goal was just to finish the race and just score some points.”