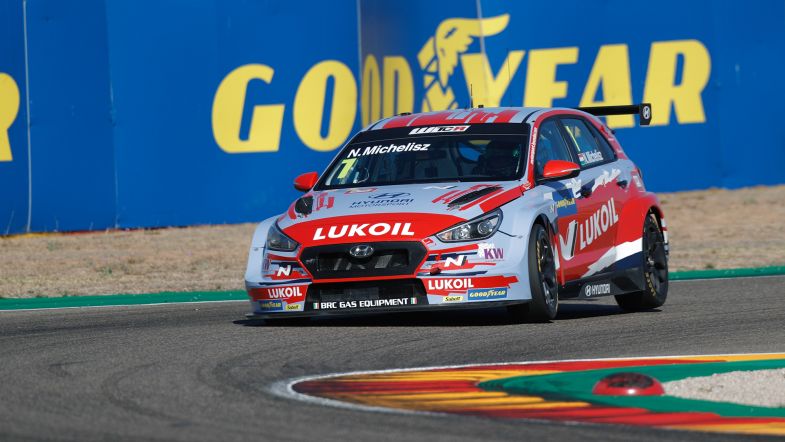 Norbert Michelisz and Jean-Karl Vernay claimed one pole position each from the World Touring Car Cup qualifying at MotorLand Aragón. Meanwhile title candidates Yann Ehrlacher and Esteban Guerrieri struggled and will start from the back of the grid in all three races.

BRC Hyundai driver Michelisz was fastest in the first qualifying session, claiming his first pole of 2020.

2018 champion Gabriele Tarquini was fourth ahead of Swedish driver Thed Björk in fifth, three and six tenths of a second behind respectively.

Points leader Ehrlacher had one of his best times disallowed and was unable to further improve on his last attempt, finishing a disappointing 18th.

There was disappointment at Münnich Motorsport as well with Guerrieri finishing 19th, just below two seconds from the top time.

There was a lengthy break between Q1 and Q2 due to a technical issue with the timing system.

The Q2 session saw quadruple world champion Yvan Muller being eliminated at the very end of the session, missing Q3 by 0.026 seconds in sixth position. Also eliminated were Tarquini, Néstor Girolami, Azcona and Michelisz, who was one of many who had his best times disallowed due to exceeding track limits.

Bence Boldizs secured the reversed grid pole position for Race 2 by finishing tenth, just as he did in the previous race weekend at the Hungaroring.

The final Q3 session was a disappointment for Nathanaël Berthon who seemed to suffer a broken driveshaft and came to a halt on the track.

Instead it was Alfa Romeo Giulietta TCR driver Vernay that became the man to beat, claiming pole by 0.233 seconds over Magnus.

Björk secured third while his Lynk & Co Cyan Racing team-mate Urrutia had to settle for fourth after making a mistake in the final part of his Q3 lap.

The first race of the weekend starts at 09:15 CET tomorrow.