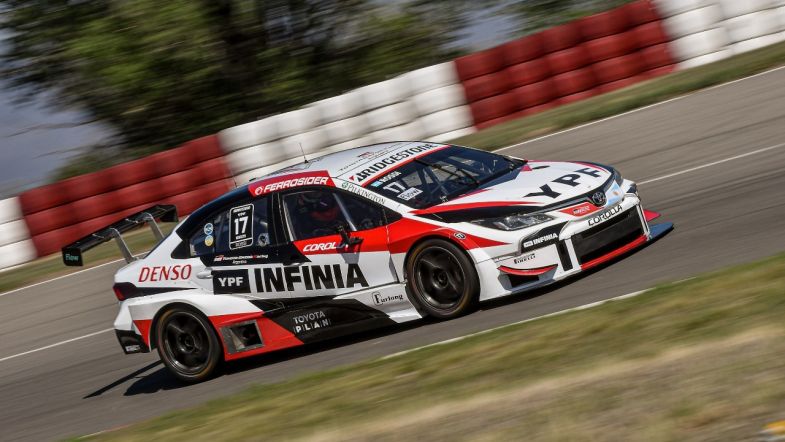 Rossi started from pole position and claimed the lead while Canapino made contact with privateer driver Jose Manuel Urcera who spun off track.

Julian Santero of Toyota Gazoo Racing Argentina also spun off when trying to avoid the two cars in front of him.

The incidents allowed Risatti to jump from ninth to third on the first lap. Former F1 driver Rubens Barrichello also benefited from the lap one chaos to climb from eighth to fourth.

Positions remained static during the first half of the race, however tyre wear was the big question for the whole weekend.

Canapino started closing in on leading driver Rossi at mid-point of the race, bringing the gap to less than a second starting lap 20 of 36.

Matías Milla retired from eleventh place on lap 21 after receiving damage to the floor of his Renault.

Rossi managed to win the race despite hard pressure from Canapino towards the end, corssing the finishing line just 0.255 seconds ahead of the Chevrolet driver.

Toyota Gazoo Racing Argentina’s Franco Vivian finished in fourth as Barrichello suffered a puncture on the last lap, dropping down to eleventh.

Tomás Gagliardi Genné claimed a career-best finish with fifth for Renault Sport while Fabián Yannantuoni rounded off the top six.

Rossi leads the championship on 88 points while Canapino is second on 60 points.

The Super TC2000 will hold two back-to-back double headers on November 29th and December 6th at a yet to be confirmed venue.