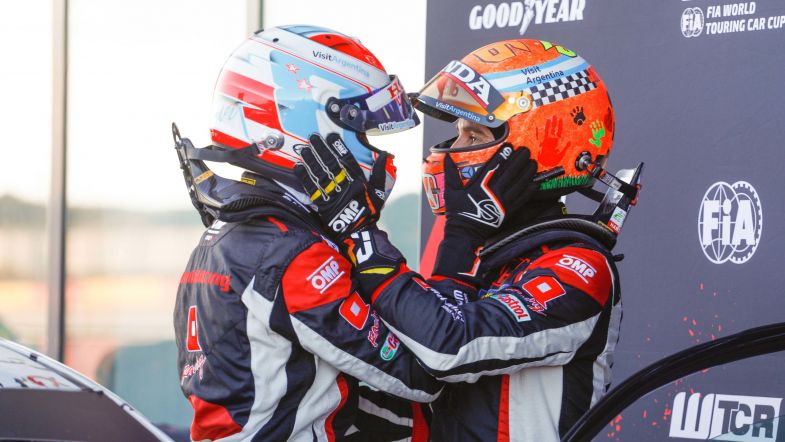 Esteban Guerrieri has expressed his appreciation of team-mate Néstor Girolami after the Argentinian Honda drivers swapped positions en route to a 1-2 victory on the final lap of Race 1 at the WTCR season-finale.

The Münnich Motorsport pair came through from grid slots outside the top ten to score a sensational double win in mixed weather conditions at Aragón on Sunday morning, drawing on a clever tyre strategy to upstage their rivals.

Girolami led comfortably as they commenced the final lap, but eventually moved over for his title-contending team-mate shortly before the line to gift Guerrieri the critical five extra points that come with victory.

“That was a very nice race,” said Guerrieri after picking up his fourth win of the season. “Obviously it’s Néstor’s win, and big thanks to him, but we played the team game and these five points are important.”

When quizzed as to why the call to swap positions came so late – with Münnich Motorsport risking a potential safety car situation that would potentially lock them into positions – Guerrieri said:

“We probably took a bit of a risk there. We had a big gap and obviously when you get a safety car you extend [the race by] two laps so it’s better to do that two or three laps from the end. But in the end it was fine and it payed off so I’m very happy.”

Guerrieri went on to detail how the race-winning decision to mix the tyres – with slicks on the front and wets on the rear – was inspired by a test session at MotorLand Aragón earlier in the year.

“It’s sunny, but this track we knew after coming here in March in similar conditions that it’s extreme on drying slowly,” Guerrieri explained. “Now it was kind of the same thing, so we said ‘OK, let’s do it’.

“Also in the warm-up laps coming out of the pits, I was on wets in the rear, but I had cars in front with full slicks and they could not drive it. There was still spray on the track.

“Then we went to the grid and we gathered together, and we said ‘look, there is nothing to lose here – we better gamble on this’. The sun was scorching on the tarmac, but still, we know it takes long to dry up here.

“It was not easy, but we climbed up the order, smooth overtakes not to overheat [the tyres], and then we pushed into three quarters of the race. Then in the end we knew we had it in the bag and Néstor let me by on the last lap.

“We have very small weapons to fight [with] this weekend. The others have a gun and we probably have a knife, but we played smart and it paid off. I’m very happy with the 1-2 and thankful to the team and to Honda. It’s an awesome feeling and we will fight until the end.”