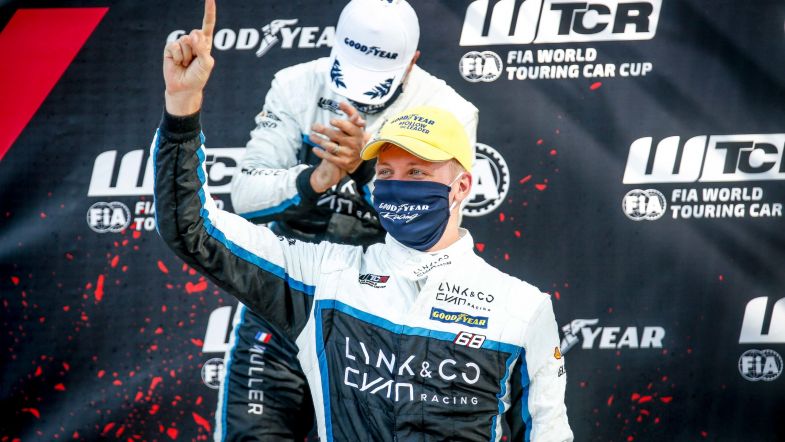 Yvan Muller scored a lights-to-flag win in the second WTCR race of the day at MotorLand Aragón, fulfilling an historic day for the family as nephew Yann Ehrlacher became the youngest-ever world touring car champion.

Muller controlled the race throughout from reverse-grid pole to score his first win of the year, but the real story played out behind as Ehrlacher took an emotional title in sixth.

The race got off to a frantic start in the midfield, with the big casualty being Ehrlacher’s championship rival Esteban Guerrieri – who clattered the back of Bence Boldizs’ Cupra in the congestion on lap one and was forced to retire.

That effectively handed the title to Ehrlacher, who needed to finish at least sixth to seal the deal and duly did just that.

“It’s amazing, I can’t believe it. Oh my God! I will be thankful for the rest of my life for this. You are the guys!” Ehrlacher cried on team radio on the in-lap.

At 24 years of age, Ehrlacher becomes the youngest man ever to win the world touring car title. By comparison, his uncle Muller – who has overseen Ehrlacher’s rise to the top – was 39 when he scored his first world title in 2008.

Münnich Motorsport Honda won the first race of the day after a strategic masterstroke, but faced adversity in Race 2.

After Guerrieri’s early retirement, their title ambitions in the teams’ championship then literally went up in smoke when Néstor Girolami’s engine expired at the start of lap eight, triggering a late safety car period.

Muller had no problems in defending his lead at the restart, aided by protection in the shape of the lapped Tom Coronel between himself and second-placed Jean-Karl Vernay.

With second, Vernay also wrapped up the WTCR Trophy.

Out-going champion Norbert Michelisz equalled his best finish of the year in fifth, nursing an oil leak aboard his Hyundai i30 N TCR in the closing laps.

There is still one race to go this season, scheduled to go green at 15.15 CET.