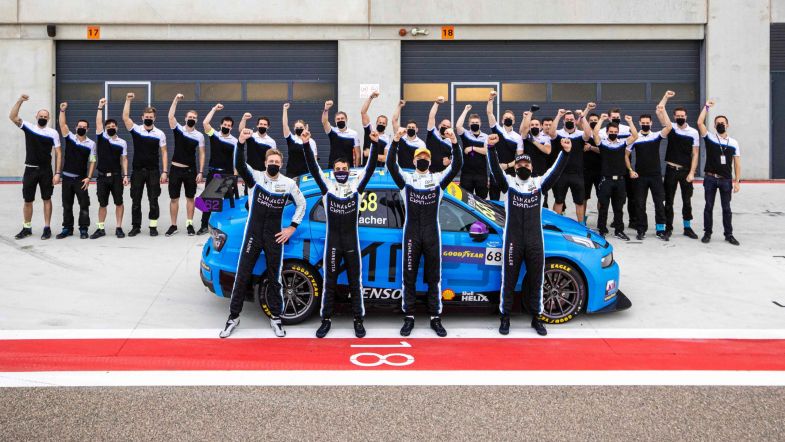 Cyan Racing holding back on 2021 driver plans despite title sweep

World touring car teams’ champions Cyan Racing refused to be drawn on a potential driver line-up for its 2021 WTCR title defence, but are widely expected to retain most of its star-studded quartet.

Cyan Racing took its fourth consecutive world teams’ title thanks to an emphatic performance at the MotorLand Aragón finale on Sunday, where the Swedish outfit won two of the three races and guided Yann Ehrlacher to a maiden championship triumph.

All of the team’s four drivers – which also include Thed Björk and Santiago Urrutia – have won races this year, with the Lynk & Co 03 TCR cars a regular feature at the head of the pack.

In Ehrlacher, Björk and Muller, Cyan Racing now has three world champions on its books, but CEO Fredrik Wahlén would not formally confirm either of them for 2021 when approached by TouringCarTimes.

“I’d rather not comment on that at the moment,” Wahlén said when asked about the team’s future driver plans. “We haven’t finalised how many cars we’ll run next year; it could be four, it could be two. A lot depends on the future of the series. That’s the main thing, and that’s why we are waiting to know what the future for WTCR holds.”

While he stepped short of mentioning any names, Wahlén continued to say that the team does have a contract in place with “one or another” of their current drivers, widely believed to be Ehrlacher.

The new champion all but confirmed that to be true when speaking to TouringCarTimes, saying “it’s not officially confirmed yet, but there’s a big chance we will go together again next year”.

Both Björk and Muller are also believed to be well-placed for a return with the team.

“Probably,” Muller responded when TouringCarTimes asked if he expects to be back again in 2021. “You know, every season except the first season [in world touring cars], I was in the top three. So that was my goal again for this year. I don’t know exactly, but 14 or 15 times in a row in the top three. There is nothing decided yet [for 2021], but I’m pleased here.”

Urrutia took his first WTCR win in the final race of the campaign on Sunday, but confirmed to TouringCarTimes that he does not have a contract in place and that he doesn’t expect his timely victory to affect negotiations.

“I haven’t signed with Cyan, but I want to continue, and I hope I can do it,” said Urrutia. “It’s one of the best teams I’ve been with in my career, my first year as a professional driver. There’s no reason to leave and I definitely want to come back.

“Obviously a win at the end of the year always helps, but for my contract I don’t think it makes any difference. I hope the news will come soon that I have signed the contract.”

Urrutia ends his rookie WTCR season in sixth in the standings, three places ahead of 2017 WTCC champion Björk.