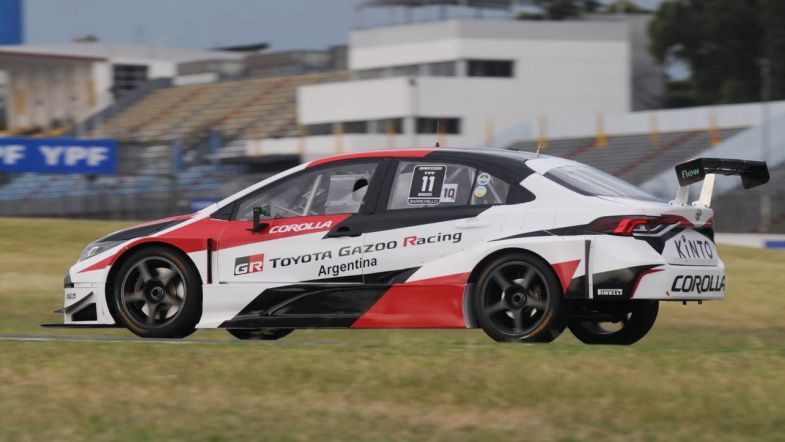 Rubens Barrichello has claimed his first feature race win of the Super TC2000 championship at the Oscar y Juan Galvez Circuit in Buenos Aires. The Toyota Gazoo Racing driver was followed over the finishing line by Agustín Canapino and Nicolás Moscardini.

The former F1 driver started from pole after winning yesterday’s qualifying ahead of Renault Sport driver Matías Milla and the Honda Racing duo of Nicolas Moscardini and Juan Angel Rosso.

Barrichello got a clean start and kept the lead while Milla spun off and Moscardini got the jump on team-mate Milla into second place.

Valentín Aguirre made a rocket start to jump from ninth to fourth.

Barrichello managed to pull up a gap and was close to four second ahead of Moscardini by lap 12.

Toyota driver Julián Santero caught Milla and challenged him for third position on lap 14. But Bernardo Llaver got in the middle of the fight and instead passed Santero for fourth.

Llaver let Canapino past who then caught Milla on lap 20. The Chevrolet driver made his move a lap later for third place.

Toyota’s Matías Rossi used the battle in his favour to catch the top drivers, passing Milla for fourth. Then Llaver made contact with Rossi, resulting in both going off track briefly and sustaining damage to their cars.

Disaster continued for Milla who made contact with Midas Racing driver Ricardo Risatti, crashing into the wall in the final corner on lap 22, bringing the safety car on track.

Rossi pitted at the same time to retire from the damage sustained in his incident with Llaver.

The race was resumed with just one lap left and Canapino immediately challenged Moscardini for second, making the move stick on the last lap.

Barrichello claimed a lights-to-flag win, crossing the finishing line just over one second ahead of Canapino and two seconds ahead of Moscardini.

Chevrolet driver Llaver finished fourth ahead of Santero while Genné rounded off the top six.

Rossi remains at the top of the standings on 88 points, followed by Canapino on 75 and Ardusso on 57 points.

The Super TC2000 championship will race next weekend in Buenos Aires again.