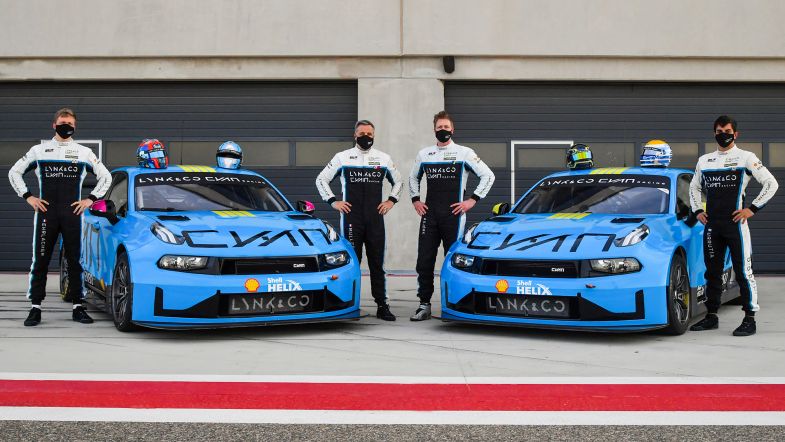 The Lynk & Co Cyan Racing team has confirmed that it will field an unchanged line-up for the 2021 FIA World Touring Car Cup season, which is currently scheduled to kick off in Germany in June.

In line with series regulations, the Swedish outfit will run its four car programme split across two teams as it seeks to defend the titles it won during the course of a truncated 2020 campaign, which saw WTCR run a compact schedule featuring six meetings on European soil.

Defending champion Yann Ehrlacher will be seeking to defend his title in the colours of Cyan Racing Lynk & Co having seen off the challenge of his more experienced rivals to lift his maiden championship title last year.

The Frenchman became the youngest winner of the title in the process, and said his motivation to try and double up was as high as ever.

“I am incredibly proud to start the season as champion with the team after what was the best season of my life last year,” he said.

“But anyone assuming I would be less motivated or ready for a new challenge in 2021 would be deeply mistaken. I have longed for this season ever since the 2020 season finale and I am very much ready.”

Ehrlacher will be partnered once again by his uncle Yvan Muller, who will seek to go one better than last year to wrap up what would be his fifth world title, having previously won the WTCC crown in 2008, 2010, 2011 and 2013.

“Anyone who knows me knows that I am only here to win and that goes for everyone in Lynk & Co Cyan Racing,” he said. “I will start my 16th world touring car season this year and I am as motivated as when I drove my first in 2006.”

The third champion in the line-up, 2017 WTCC winner Thed Björk, will be entering his tenth successive season with the team and heads the Cyan Performance Lynk & Co line-up.

Björk endured mixed fortunes across the 2020 season, with just one win in Spain, and ended the year in ninth place in the standings, with his focus firmly on improved results as he seeks to launch his own championship challenge.

“I am really proud to be a part of the journey the team has done since 2012 and it boosts my confidence that they put their faith in me for a tenth straight season,” he said.

“My goal for 2021 is firmly set on taking a big step forward in the results and to challenge for the very top step of the standings.”

Björk will again be partnered by Uruguayan racer Santiago Urrutia, who moved up to WTCR last season with the team as replacement for Andy Priaulx.

Having ended the year strongly with four podiums across the final six races, including a maiden win in the season finale, he too goes into 2021 with his focus on championship silverware.

“I want to pick up right where I left off in the season finale when I claimed two poles and my first WTCR victory,” he said. “I really feel at home in the team after my debut season and I aim to keep moving forward. My ultimate goal is of course that we win as a team and for me personally to become world champion.

“I hope that I can make everyone proud who has helped me in my racing career this year.”

The announcement of the four Lynk & Co Cyan Racing drivers takes the entry for the 2021 season up to twelve thus far, with the four Honda drivers who ran with Münnich Motorsport last year all returning, and Comtoyou Racing having confirmed two of the four drivers that will race the new Audi RS 3 LMS.