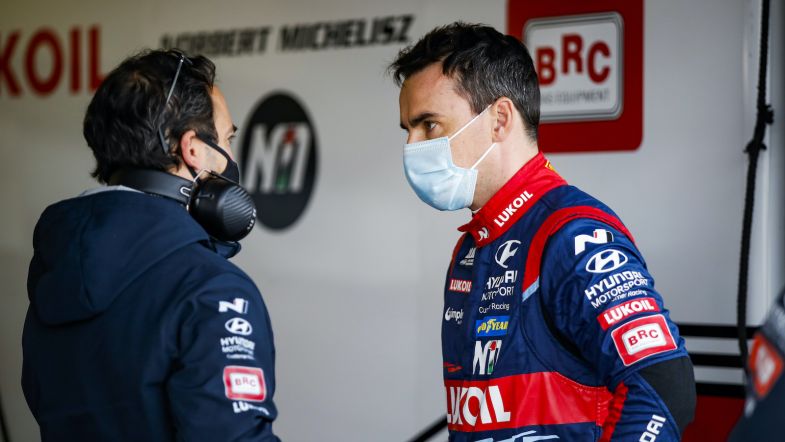 BRC Racing’s former WTCR champions Norbert Michelisz and Gabriele Tarquini have expressed confidence that the new Hyundai Elantra TCR will be the car to allow them to fight for title honours in the 2021 season.

Hyundai will bring the new car to the world stage this season to replace the i30 N TCR with which the pair took their respective titles; a decision made after the two Hyundai customer teams endured a tough 2020 campaign on track.

Both BRC Racing and Engstler Motorsport would miss the German event early in the year after Hyundai withdrew the two teams citing that neither was “given equal treatment in the series to other competitors” and the i30 managed just a single win all season.

The introduction of the Elantra comes on the back of an extensive test programme in recent months, with Michelisz – the top Hyundai driver in the standings last year – saying he was confident that the car would allow the Korean marque to return to form in 2021.

“Last season I had the #1 on my car, and my first aim is simply to get it back again,” he said. “Having tested the Hyundai Elantra N TCR I am confident that we can continue the success we had with the Hyundai i30 N TCR.

“Working with the Customer Racing department engineers it is clear how much effort, and how much of the knowledge from the last three years has gone into the design of the car. As a driver I also have the benefit of three years in WTCR, with BRC Hyundai N LUKOIL Squadra Corse and with Gabriele as my team-mate, so we should have a great combination.”

Tarquini, very much the elder statesman of the grid this season at the age of 59, said he felt better than ever going into 2021 and said the new car provided the best possible chance of success.

“This is the most prepared I have been for the start of the WTCR – FIA World Touring Car Cup since 2018, when I won the title,” he said. “At that time I had been part of the development of the Hyundai i30 N TCR, and this season we have been testing with the Hyundai Elantra N TCR since last summer.

“This should show in the performances of BRC Hyundai N LUKOIL Squadra Corse on-track when we start racing. Every year WTCR is very competitive, so it can make a big difference to have any advantage over the other drivers and I think with our experience testing the new car, we have that.”