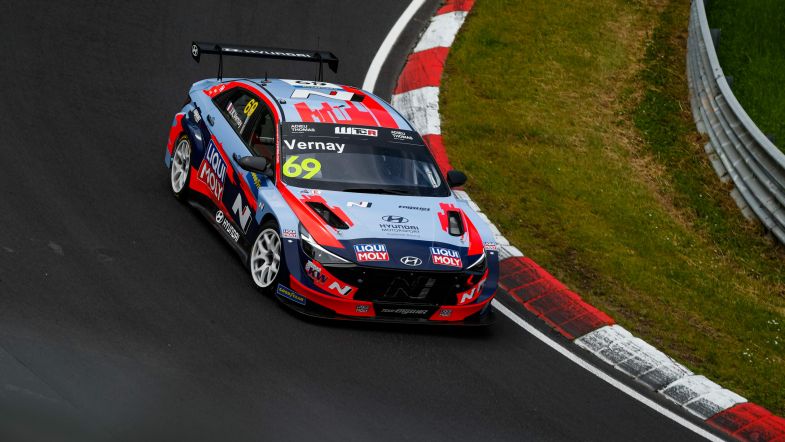 Jean-Karl Vernay: “I thought it was already over after first lap near-miss”

New Team Engstler recruit Jean-Karl Vernay feared his qualifying could have ended prematurely after a grassy moment on his first qualifying attempt at the Nürburgring.

The Frenchman, in his first competitive outing in a Hyundai, missed out on Thursday’s first practice session following a mechanical issue and only had one session before qualifying.

Vernay was the nearest challenger to pole sitter for Race 2 Néstor Girolami, setting a time which was just eight-tenths off the Honda driver’s best. But a moment early on in the session nearly cost Vernay everything.

“Today was the day where we needed to put everything together and give it everything because we know the quality of the grid in WTCR,” Vernay said in the post-qualifying press conference.

“If you want to be on the front-row, you need to give everything and I felt good.

“I took many risks and I thought it was already ready after the first lap, going a little bit onto the grass but I was able to make a good lap. Not as good as Néstor but I think we can be happy.”

Like Girolami’s Münnich Motorsport team-mate Esteban Guerrieri, Vernay was hamstrung in the opening practice session with technical issues, which prevented him from setting a lap-time in the 40-minute session.

Despite this, Vernay was able to get out for FP2 and posted the eighth-fastest time. Not bad for his first proper time in the new Hyundai Elantra N.

“We had a little bit of an issue yesterday; we were a bit late finishing the car,” Vernay said.

“It was a minor issue but here [at the Nordschleife] it can be dangerous with this kind of problem. But we were able to solve it before FP2 and make sure I was able to get out and find some rhythm and discover this track and these conditions. I can’t wait for tomorrow, to score big points and to finish both races with good results.”