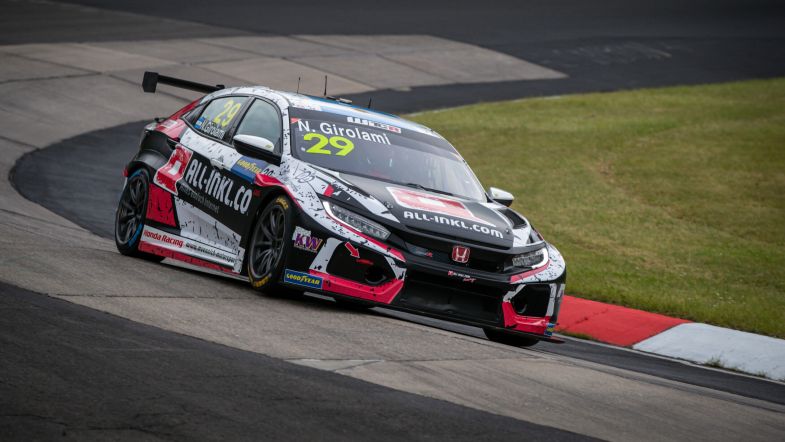 The Honda Civic Type-R driver set a best time of 8m54.791 on his penultimate run of the session, and finished 0.780 quicker than Vernay.

Girolami’s team-mate Esteban Guerrieri will start third on the grid for Race 2, while Cyan Racing’s Lynk & Co duo Yvan Muller and Yann Ehrlacher will line up on the front-row of the reversed grid of Race 1.

Despite the threat of rain ahead of qualifying, the 40-minute session began in dry conditions with the Lynk & Co quartet of Ehrlacher, Muller, Björk and Urrutia heading out in tow early on.

The Hondas did likewise and it was Attila Tassi who initially set the early benchmark of 8m59.285 to go just over a second quicker than Münnich Motorsport team-mate Esteban Guerreri.

Tassi had looked like going quicker on his second attempt after setting a purple sector at the end of the Grand Prix loop but nearly lost it all with a brief trip across the grass at Hatzenbach, where Muller crashed at the end of Thursday’s opening practice session.

Somehow, Tassi kept it out of the wall, but the Hungarian was clearly struggling with the rear-end of his Civic Type-R TCR as typified by a full opposite-lock power slide around Aremberg, which finally ruined his lap for good.

Girolami and Guerrieri weren’t feeling the impact of a loose Civic on their second runs though, with the former setting the fastest times in the first two sectors, while Guerrieri topped sector three.

Having put a lap together, Girolami then went fastest on a 8m54.791, but only after a flurry of activity where it seemed like everyone of the top ten had a go at the top of the table.

Although the session was run in completely dry conditions, rain did threaten the end of the running with clouds approaching from the bottom of the Döttinger Höhe.

Thankfully, this didn’t arrive in time for the final runs, which produced an improvement for Urrutia who jumped past Tarquini to set the fifth-fastest time, and for Münnich Motorsport’s Tiago Monteiro who improved to seventh.

Ultimately, it was something of an anti-climax at the end of the session as Vernay was unable to better Girolami’s time on his final run, which meant that Girolami backed off to secure pole.

It was a frustrating session for the Cupras, with Mikel Azcona, who spent a lot of time in the pits with a broken front splitter, 19th, one place behind Zengo Motorsport team-mate Rob Huff.

Bence Boldizs and Jordi Gené rounded out the field, slowest of all.

Race 1 is scheduled to take place on Saturday at 09:00 CEST.