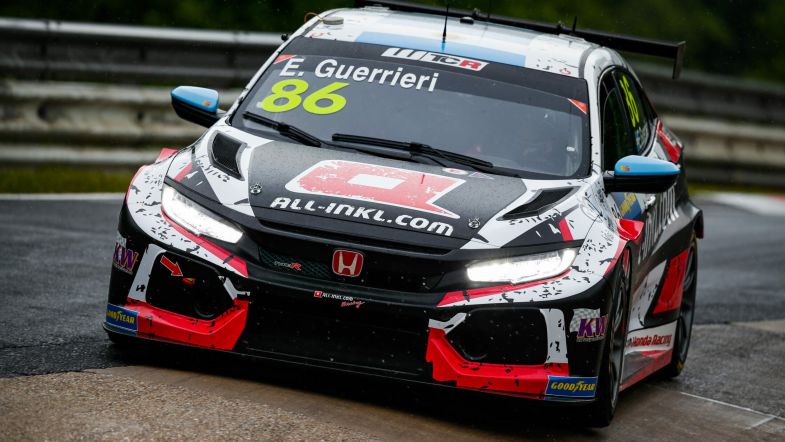 Esteban Guerrieri says his third place in qualifying for the second WTCR race at the Nürburgring was ‘a little reward’ for his Münnich Motorsport team after a difficult start to the weekend in practice.

The Honda Civic Type-R TCR driver endured a frustrating opening practice session on Thursday, struggling to 12th before only managing 14th in the second.

The cause of the struggles stemmed from a steering rack issue which cost the Honda team several minutes during the session and subsequently forced an all-nighter on the team overnight to rectify the set-up problems.

“I have to thank the team because we had some issues yesterday with the steering rack and so on,” Guerrieri said in the post-qualifying press conference.

“The mechanics basically had to work hard for 72 hours in a row, they barely slept, so this one is a little bit of a reward for them, to be able to put it there in the top three and to be able to fight for good points tomorrow.”

Guerrieri was one of two Hondas to occupy the top three after qualifying, with team-mate Néstor Girolami claiming pole position for Saturday’s Race 2 at the Nordschleife.

The Hondas had shown particularly strong pace in the first half of the 40-minute session, setting the fastest times in three of the circuit’s five sectors.

For Guerrieri, his third fastest time was one which took maximum effort, and one which ultimately paid off.

“This kind of session only happens once a year and it really takes everything out of you, the energy, the balls, everything you need to put into it.

“I really went for it because we didn’t know if it was going to rain or not, so already from the beginning we just went for a hot lap”

Despite the threat of rain towards the end of the session, the circuit remained largely dry even though Guerrieri admits that the track did begin with some damp patches.

Nevertheless, the Argentinian’s final effort feature yet more set-up changes which he hopes will give him a more optimised race car for tomorrow.

“There was already a couple of places where it was a little bit damp, a little bit dusty but you have to just try not to crash, just to keep pushing and it was good fun,” Guerrieri added.

“My last attempt, we changed the setup a little bit because we had a bit of understeer because it is hot, and it is very demanding on the tyres. And I knew where to improve the car but, in the end, it’s difficult to put it all together, you’ll always make a few mistakes but it’s fun. We have a good feeling for tomorrow.”