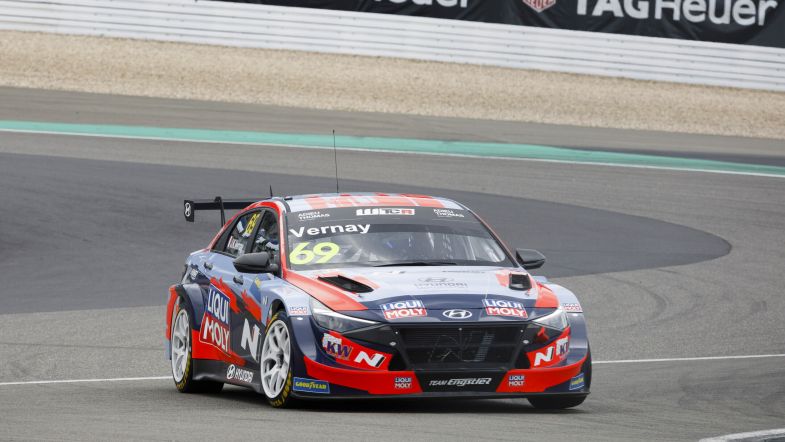 The Frenchman, on his first World Touring Car Cup outing for his new brand, started on the outside of the front-row and leapfrogged pole sitter Néstor Girolami to seize the lead at the first corner.

Engstler was the nearest rival all race and arguably had the faster car as Hyundai dominated proceedings throughout the three-lap race.

Girolami was a distant third, some 12 seconds in arrears, while his Honda team-mate Esteban Guerrieri suffered a miserable race in the second Münnich Motorsport entry.

Unlike in Race 1, the start was frenetic even before the lights went out as third-place Guerrieri failed to get off the line for the formation lap, after a technical problem. He was forced to start from the pit-lane.

At the start proper, Vernay got the jump on Girolami and led into the first corner, while Engstler profited from the lack of Guerrieri alongside him to also vault past Girolami for second, despite taking to the pit exit to do so.

Behind, chaos ensued as BRC Racing Hyundai’s Norbert Michelisz got spun around and hit by the Zengo Motorsport Cupra of Mikel Azcona, who also took the Target Competition Elantra of Andreas Bäckman with him.

Michlelisz initially tagged the back of Ehrlacher at the exit of Turn 1 but was hit by Azcona, who in turn was spun around by his team-mate Rob Huff. Heavy contact put both Azcona and Michelisz out on the spot, while Bäckman also suffered terminal damage after trying to avoid the spinning Azcona.

Out front, the Hyundais made quick their escape as Vernay led Engstler, with Girolami some two seconds adrift by the end of the first lap.

Vernay and Engstler continued to pull away from Girolami as the race wore on, with Engstler seemingly the faster of the two Elantras, without being able to challenge for the lead.

Engstler was repeatedly warned over the team radio of the importance of the result for the team, but the German closed right to within two-tenths at the start of the final lap on the Grand Prix loop.

The pair were inseparable on the final run to the flag, with Engstler pulling alongside Vernay down the Döttinger Höhe, but not managing to complete the pass. After the flag, Engstler complained: “Why? I don’t understand, why did you do this?” pointing towards a team call which stopped him from a shot at the victory.

Vernay duly took the win, his first for Hyundai, while Girolami was the best of the rest in third, a dozen second adrift.

Attila Tassi produced a strong race from 13th to finish fourth in his Honda Civic Type-R, which included a great pass on Cyan Racing’s Santiago Urrutia on the first lap.

Urrutia finished fifth, ahead of the best of the Audis Nathanaël Berthon, while Yvan Muller was seventh.

Magnus’s team-mates Frédéric Vervisch and Tom Coronel each endured difficult races, with Coronel finishing 11th after an off-track moment on the Nordschleife.

For Vervisch, his incident was even more scary, as he slewed across the grass at almost 160mph approaching the Tiergarten corner on the opening lap. His Audi RS 3 LMS ground to a half on the Grand Prix loop soon after, with steam pouring out of the car.