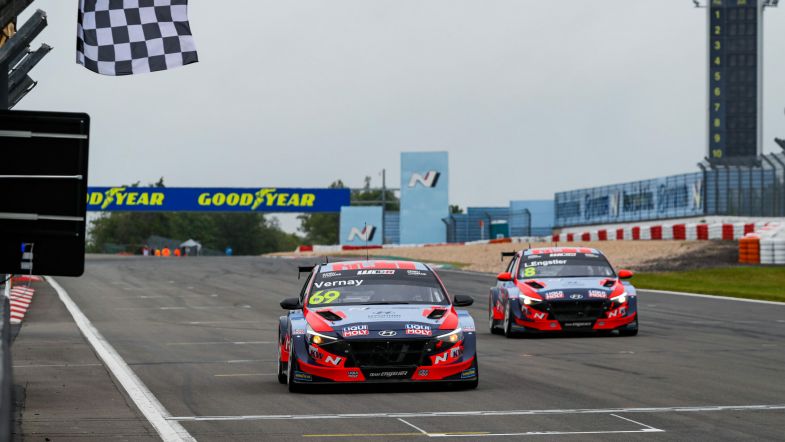 Luca Engstler says that he was “a bit too young and stupid” during the second World Touring Car Cup race at the Nürburgring despite finishing second to team-mate Jean-Karl Vernay.

Engstler started fourth on the grid but was quickly up into second place by the first corner and proved to be one of the fastest drivers on track throughout the race.

Twice the German tried to find a way past Vernay for the lead, most notably on the final stretch down the Döttinger Höhe on the last lap, pulling alongside his team-mate but failing to make the move stick.

Engstler appeared to vent some initial anger after missing out on victory on home soil, but following reflection, the Engstler Racing driver believes he can take the positives from the opening weekend of the year.

“Today was a big gamble with the weather and I think we made the right choice, putting everything on dry [setup],” said Engstler during the post-race press conference.

“I was attacking from the first to the last lap, I wanted this victory and to be honest, I was probably sometimes too young and stupid, and overdriving but luckily it worked out and we are here with the one-two.

“I just want to keep working hard, I want to keep the momentum and right now, I will focus on the 24 Hours of Nürburgring and the main goal is to win that.”

For Vernay, his Race 2 triumph puts the Frenchman into the lead of the standings, something which did not seem likely following a technical issue during Thursday’s opening free practice session, which forced the new Hyundai recruit to miss the entire running.

“This weekend has been a bit up and down, and Race 1 we also had some issues,” Vernay said.

“But to have a weekend like this is perfect. It’s a fantastic start to the season, [but need to] keep focused and I’m only focused on the championship.”

Vernay admitted that his second race was not trouble free either, with the Hyundai suffering from brake problems. Despite this, Vernay managed to hold on a claim his first win for the brand and felt he was pushing over and above what he needed just to keep Engstler behind him.

“At some point, I was lucky to have my team-mate next to me as we could work together in case other drivers were pushing,” explained Vernay.

“Luca has fantastic potential and will be a contender for this year. I think I had a good race and was able to push in the second lap but I had a little issue with the brakes so I had to take a little bit of care.

“The car was handling amazingly, I was driving at 150% and when you are feeling good, you can take risks and the speed comes naturally.”

Cyan Racing’s Yvan Muller is 10 points adrift of compatriot Vernay, tied with team-mate Santiago Urrutia, while Engstler is sixth in the standings on 26 points following his second place.