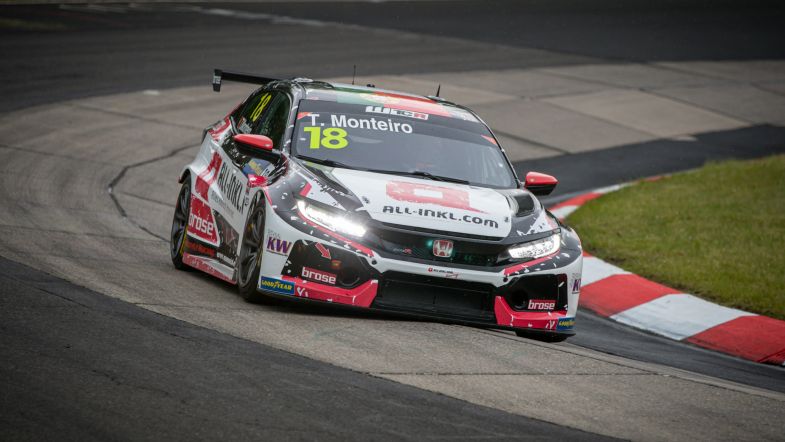 Race 1 winner Tiago Monteiro says he knew he would only have “one opportunity” to pass race leader Yvan Muller if he was to take victory in the opening encounter of the WTCR season at the Nürburgring.

The Münnich Motorsport Honda driver started fourth on the grid but lost out to the other Cyan Racing Lynk & Co car of Santiago Urrutia on the opening lap.

But the experienced Portuguese profited from a fierce lead battle between Yann Ehrlacher and Gabriele Tarquini, which closed even further at the start of the final lap, to make his crucial final-lap surge for the win.

“I tried to be smart in that one you know, I was really banged up in the first lap but I kept my focus and thought it was still a long race, even though it’s only three laps,” Monteiro said in the post-race interview with Eurosport.

“So, I tried to push as hard as possible, saw my opportunity when I saw Gabriele tangle at the first corner and after that, I just had to try and follow Yvan as much as possible.

“I knew my only chance would probably be on the straight line so I needed to be as close as I could and prepare. And you know when you have a plan and everything works out? That’s what happened today. I’m very happy to start the season like this.”

As for pole sitter Muller, the lack of straight line speed in his Lynk & Co made his obvious to him that he was effectively a sitting duck on the long back straight, having been passed by the BRC Racing Hyundai Elantra of Tarquini at the end of the second lap.

Despite this, Muller was happy enough with his second place to start the season, on a track where his car wasn’t the fastest.

“It was close, but not enough,” said Muller.

“I knew what could happen and I was quite far ahead on the last corner [before the straight] in front of Tiago but with the slipstream and the power of the Honda, they were better compared to us so he could have overtaken me quite easily.

“I’m pleased with the second place but I am still disappointed because maybe I should have let Yann pass me because he was faster than me. Okay, we have to learn from this.”