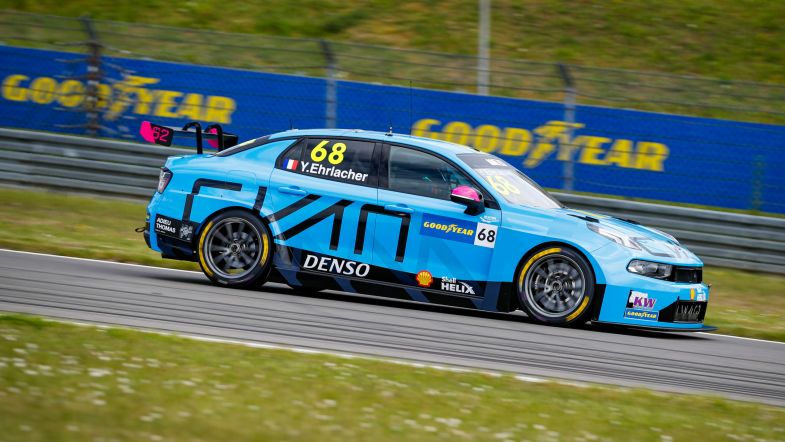 Rivals ‘on another planet’ in straight line says Yann Ehrlacher

Cyan Racing’s Yann Ehrlacher says that rival brands Hyundai and Honda are ‘on another planet’ in a straight line after enduring a dificult opening WTCR round of the year at the Nürburgring.

The Lynk & Co struggled for top-end pace over the course of the weekend, particularly on the long Döttinger Höhe straight at the end of the Nordschleife versus the faster Hyundai Elantra N TCR and the Honda Civic Type-R TCR.

Ehrlacher lined up second on the grid for Race 1 alongside team-mate and uncle Yvan Muller. But while Muller missed out on victory on the last lap, Ehrlacher languished down in eighth by the end.

“The pace was there I would say, we have been quite unlucky,” Ehrlacher said.

“We set the pace in practice which means the car was going well and we were confident. We had a couple of issues in qualifying which didn’t allow us to be in the front.

“Then in the races, it’s quite clear that the Hyundai and Hondas are on another planet in terms of top speed than us. We’re quite slow on the straights and we have no chance to defend anything at the moment.”

Ehrlacher bemoaned what he described as a missed opportunity in Race 1, having run closely behind Muller in second until the end of the second lap.

The Alsacian reckons a one-two would have been possible for Lynk & Co had it not been for contact sustained during the lead battle.

“We missed what was an easy podium in Race 1, even a win but guys crashed into us, and it was the same in the second race at T1, so I dropped places and finished P8 and P10 which is quite a bad result,” Ehrlacher explained.

“We have to work from this, there was not really anything we could do about this so we’ll just have to concentrate on the next round.”