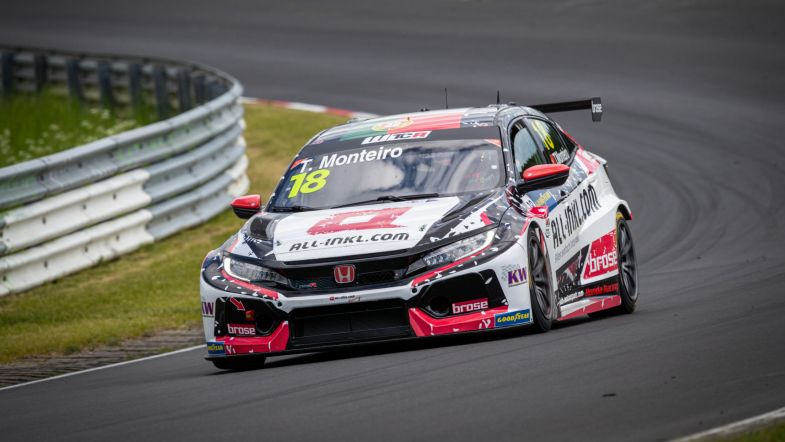 Monteiro prevailed in a typical final-lap slipstreaming affair down the Döttinger Höhe to seal a victory which seemed unlikely at the start of the three-lap encounter, having started fourth and dropping a place on the opening lap.

But the Honda top-end pace combined with the lower performance in a straightline from the Lynk & Co of Muller ensured Monteiro took the win by just over half a second at the finish.

Behind Muller, the second Cyan Racing Lynk & Co of Santiago Urrutia completed the podium after pulling off a series of well-executed overtakes.

Yann Ehrlacher, who started second, struggled to maintain his strong qualifying pace and ended up seventh in the end.

Despite a largely dry circuit, the race was declared wet which allowed the field to select whether or not to run wet tyres during the three-lap encounter.

Off the line, Muller claimed the lead into the first corner ahead of team-mate Ehrlacher as Norbert Michelisz got pitched sideways after receiving contact.

Urrutia also made a solid start and went up a place from fifth on the grid past the Münnich Motorsport Honda Civic Type-R of Monteiro before the end of the Grand Prix Loop.

Muller maintained his slender advantage around the mist-covered opening lap but soon found himself under pressure from both Ehrlacher and third-placed Gabriele Tarquini down the Döttinger Höhe.

With a mind to defend his second place against the charging Tarquini, Ehrlacher was almost forced into the back of Muller at Turn 1, the pair briefly making contact but the positions remaining the same.

Tarquini was clearly the faster of the three leaders on the second lap and made a move towards the inside of Ehrlacher as the field navigated the left-right switchback at Adenauer Forst. Tarquini tagged the back of the Lynk & Co, tipping Ehrlacher into a half-spin, which he brilliantly caught.

That allowed Muller some extra breathing space, but it wasn’t long before Tarquini breezed past Ehrlacher on the run through Kesselchen to grab second.

That became the lead – temporarily – at Tiergarten with Tarquini using the Hyundai Elantra’s superior straight line speed to pull alongside Muller on the Döttinger Höhe and sweep into the lead. Unfortunately for Tarquini, he ran wide at the final corner and dipped two wheels onto the grass which allowed Muller back into the lead.

The domino effect of this affair was significant, as Urrutia now made a surge for second place at the entry to Turn 1. This move forced both Urrutia and Tarquini – who locked his brakes – wide and enabled Monteiro to sneak through into second on the exit of the corner.

Now with confidence and a faster car, Monteiro set about lining up Muller and stayed in touch with the French veteran through the Nordschleife before teeing himself up for the Döttinger Höhe.

That tactic worked a treat as Monteiro seized the advantage over Muller – who appeared content to settle for second – on the final run to the flag.

Muller clung on to finish second ahead of Urrutia, while Monteiro’s Münnich Honda counterpart Esteban Guerrieri quietly impressed en route to fourth at the finish.

Along with team-mate – and Race 2 polesitter – Néstor Girolami, Guerrieri was one of the performances of the race, staying out of trouble when he had to in order to score big points ahead of the second encounter.

In front of them, Michelisz recovered well from his first-lap contact to end up fifth, ahead of Tarquini and the Comtoyou Racing Audi RS 3 LMS of Tom Coronel and Ehrlacher.