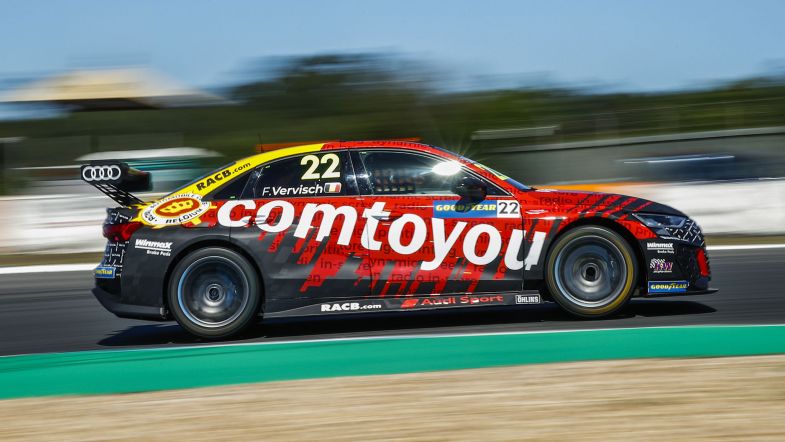 Frédéric Vervisch of Comtoyou Racing claimed a lights-to-flag run in FIA WTCR Race 2 at Motorland Aragón to take his first victory of the season, in a race marred by tyre issues in the hot temperatures.

Zengo Motorsport’s Rob Huff (Cupra Leon Competición) started from the back of the grid as the team requested to break the parc fermé to repair the turbo and clutch issues that forced the Briton to retire from Race 1.

At the start Vervisch made his pole position count to take the lead ahead of Lynk & Co driver Thed Björk and Audi colleague Gilles Magnus.

Zengo Motorsport’s Mikel Azcona (Cupra Leon Competición) made a terrible start and came close to stalling, falling to the back of the pack.

Yvan Muller (Lynk & Co 03 TCR) came under fire from Hyundai driver Luca Engstler on the second lap, with the German driver overtaking for 11th place as Muller out braked himself at Turn 1. The Frenchman was then passed by team-mate Santiago Urrutia.

At the front Vervisch opened a slight gap, with Björk responding as Magnus was also pursued by BRC Hyundai driver Norbert Michelisz.

Urrutia suffered a suspension issue and retired to the pits on lap five.

Meanwhile, Huff was having a good recovery race, up to 12th place by lap five and closed the gap to Muller. The Briton overtook the Frenchman on lap seven.

Michelisz complained of “big vibrations” on his right front tyre, losing fourth place to Hyundai colleague Jean-Karl Vernay, with the Hungarian then coming under attack from Comtoyou’s Nathanaël Berthon and Tom Coronel.

The safety car was called into action as Tom Coronel stopped on the track towards the end of the race due to what seemed to be an electrical issue, with the race distance increased to 13 laps.

Vervisch kept the lead at the restart ahead of Björk and Magnus, with Vernay in fourth place. Berthon and Tarquini overtook Michelisz, with the Hungarian also falling pray to Ehrlacher and Engstler after suffering a puncture.

At the chequered flag Vervisch took the victory with Björk and Magnus completing the podium. Vernay managed to control his tyre vibrations to finish in fourth place.

Berthon was fifth, ahead of Tarquini and Ehrlacher, with Engstler right behind. Huff continued his charge to finish in ninth place, with Muller completing the top ten.

Guerrieri recovered through the pack to finish in eleventh place with the Honda Civic Type-R TCR of Münnich Motorsport, followed by Azcona and team-mate Néstor Girolami.

Vervisch said after the race: “I had a mega start and a good pace. I was quite afraid for the end of the race as I thought Thed had saved his tyres. The safety car wasn’t good for us as I had used them at the beginning, but I’m happy because it’s a great result for the team.”

Vernay has strengthened his lead in the championship with 82 points, eight ahead of Ehrlacher and 15 over Muller.

The next round of the WTCR takes place at the Adria Raceway (Italy) from the 31st of July to the 1st of August.