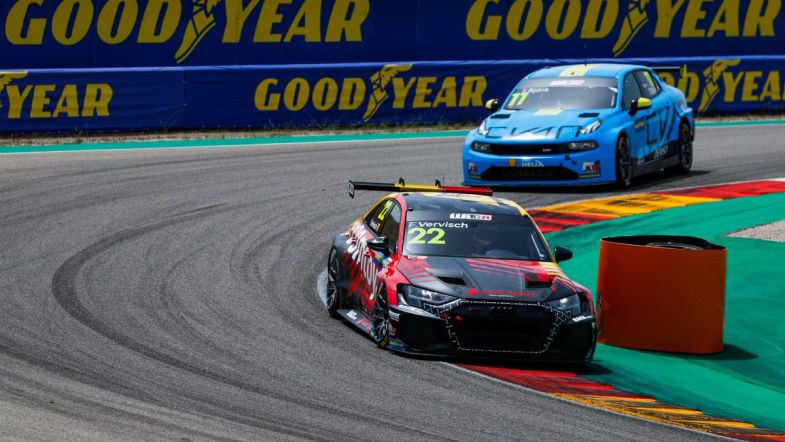 Comtoyou Racing driver Frédéric Vervisch claimed an important victory in the second FIA World Touring Car Cup race at Motorland Aragon behind the wheel of his Audi RS 3 LMS and praises his team.

“I have to thank our team, the brand Audi, the new car that Gilles (Magnus) proved as well,” Vervisch said after the race. “Congrats to him and to Thed (Björk). I’m extremely happy to convert a pole position.”

The Belgian started from pole position after a strong lap in Saturday’s Q3, knowing that Cyan Racing’s Thed Björk (Lynk & Co 03 TCR) wouldn’t make it easy for him.

“From the outside it looks all easy, but I can tell you there was again a lot of tension to have the good start,” added the Comtoyou driver.

“You have nobody in front of you, so it’s always a bit different. But the start was mega and Thed was quite fast. He told me he had one opportunity, maybe there was another one where he could really try something.”

The safety car was called into action when Tom Coronel stopped on the track due to a technical issue, with Vervisch losing his advantage over Björk. Despite the tyre degradation, the Belgian still managed to stay ahead and take his first win of the season.

“I think after a couple of laps I just had a small gap and I was hoping that Gilles would put some pressure on him and probably he did, I’m not sure,” said Vervisch.

“Anyway, the gap was there, so I was not happy with the safety car! The restart was actually bad, but it was at the end good because it was strange, I think there was a lot of pick-up that I didn’t notice and I think everybody was surprised.”

After the strong weekend Vervisch lies in 11th place in the championship, 33 points behind Jean-Karl Vernay (Hyundai Elantra N TCR).