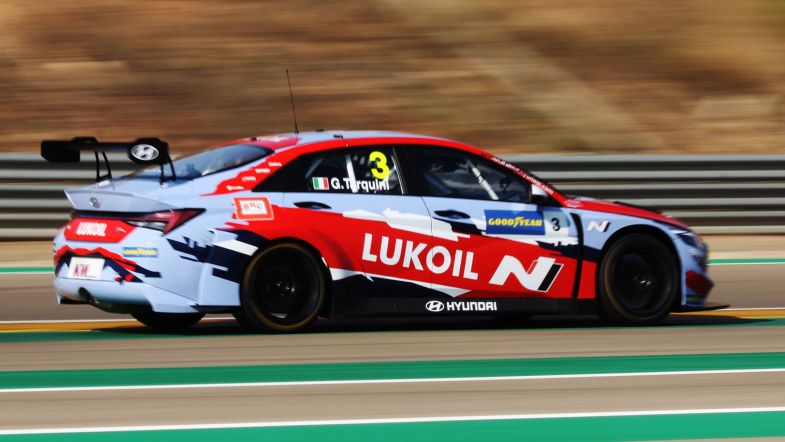 BRC driver Gabriele Tarquini claimed a lights-to-flag victory at the wheel of his Hyundai Elantra N TCR in Race 1 of the weekend at MotorLand Aragón, his first victory in the WTCR for two years.

At the start Tarquini made his pole position count to take the lead ahead of Zengo Motorsport’s Mikel Azcona (Cupra Leon Competición) and Yann Ehrlacher, with the Lynk & Co 03 TCR of Cyan Racing.

Coronel and Ehrlacher came side-by-side on lap two, with the Dutch overtaking the reigning champion for third place, with Berthon following suit soon after. This put Ehrlacher under pressure from Audi driver Gilles Magnus.

Further back Thed Björk started to suffer with his tyres, having to defend from Comtoyou Racing driver Frédéric Vervisch and Engstler Motorsport driver Jean-Karl Vernay.

Magnus and Hyundai driver Norbert Michelisz upped the pressure on Ehrlacher, with the Belgian coming side-by-side with the Frenchman on lap four. But Magnus out braked himself, instead coming under fire from Michelisz.

Zengo Motorsport’s Rob Huff retired to the pits on lap seven with a technical issue as Vervisch, who had overtaken Björk, made contact with Michelisz.

Vervisch tried a move on Michelisz on the final lap, with both making minor contact.

Tarquini took his first first win of the season as the chequered flag fell, with Azcona and Coronel completing the podium after overtaking Berthon on the last lap.

Ehrlacher took fifth place, keeping Magnus at bay, with Michelisz and Vervisch next. Vernay and a struggling Björk completed the top ten.

Muller got ahead of Urrutia to finish eleventh, with Luca Engstler (Hyundai Elantra N TCR) in 13th place.

Race 2 of the WTCR at Motorland Aragon is scheduled for 13:15 CEST.