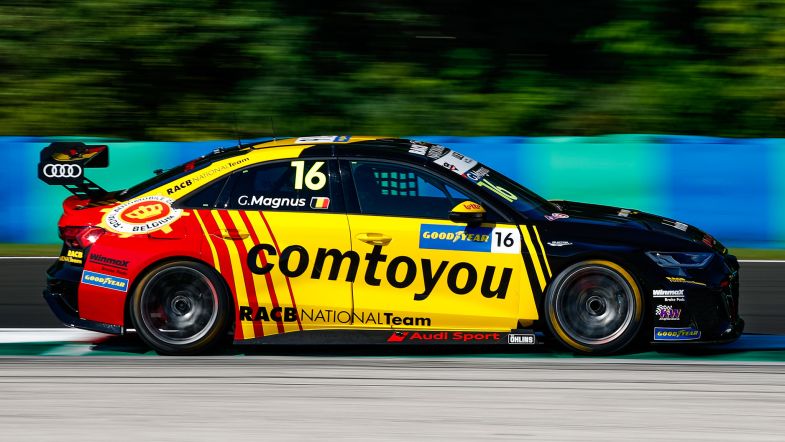 Comtoyou Racing driver Gilles Magnus achieved his first ever WTCR victory in an incident-packed race at the Hungaroring.

The race started with Magnus and Frédéric Vervisch (Audi RS 3 LMS) sharing the front row due to the reverse grid rule.

At the start, Magnus took the lead ahead of Vervisch with the Lynk & Co 03 TCRs from Yvan Muller and Yann Ehrlacher breathing down his neck.

Muller, however, got tagged by Zengo Motorsport’s Mikel Azcona (Cupra Leon Competición), spinning off at Turn 1.

Honda driver Attila Tassi made progress in the first part of the race, overtaking Gabriele Tarquini (Hyundai Elantra N TCR) for 13th place. The Italian, however, recovered his position on lap six after Tassi received a track limits final warning.

Azcona overtook Ehrlacher for third place, with the Spaniard under investigation because of the Muller incident at the start.

The safety car came into action when Zengo Motorsport’s Rob Huff, who’d been running in seventh place, stopped on the track on lap seven with a damaged front left suspension on his Cupra Leon Competición after hitting the tyre stack at the chicane.

Berthon received a ten-second time penalty because of several incidents and collisions during the race, with Comtoyou retiring his Audi to the pits.

The race was restarted after five laps, with the race duration extended to 14 laps.

At the restart Magnus kept the lead, with Vervisch holding off Azcona. The Belgian missed the braking point at Turn 1 on lap 13, with the Spaniard coming side-by-side but was unable to overtake.

Hostilities between the two continued onto the last lap, with Azcona looking for a gap with Vervisch defending hard. Both came side-by-side several times until Azcona took the inside of Vervisch, with both colliding and Azcona taking second place and Ehrlacher also overtaking the Belgian.

At the chequered flag Magnus took his first WTCR victory, followed by Azcona and Ehrlacher on the podium.

“The start was going to be crucial,” Magnus said after the race. “It was crucial to have Fred (Vervisch) there because Azcona was coming quick, but yes, it’s a great feeling.”

Ehrlacher is now the new championship leader on 90 points, six ahead of Vernay and 13 over Magnus. Urrutia is fourth, 14 points adrift.