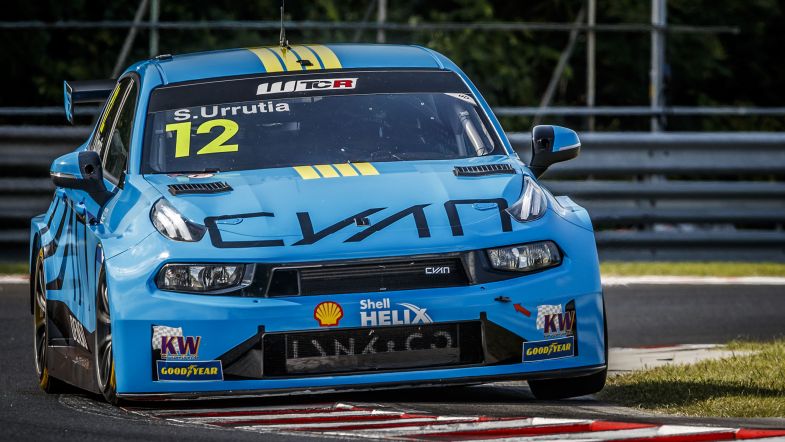 Santiago Urrutia scores his first win of 2021 at Hungaroring

Cyan Racing’s Santiago Urrutia led a lights-to-flag race to claim his first victory of the season at the Hungaroring.

Zengo Motorsport did their best to repair the suspension damage in Rob Huff’s Cupra Leon Competición, but an issue with a suspension bolt prevented the Briton from taking his pole position spot on the grid.

Huff started the race from the pit lane and later received a drive-through penalty for a start infringement.

Reigning champion Yann Ehrlacher and Yvan Muller (Lynk & Co 03 TCR) had a coming together with Zengo Motorsport’s Mikel Azcona (Cupra Leon Competición) at the start, with the Spaniard overtaking both to climb up to fourth place.

Vervisch went wide at Turn 1 on lap five, with Azcona going side-by-side. The Belgian managed to keep the momentum into Turn 2 to keep third place.

Muller soon fell back from Ehrlacher, with team-mate Thed Björk catching up with the Frenchman on lap seven. Two laps later, Ehrlacher complained of a “big vibration” at the front of his car.

Further back, Michelisz made his way through the pack to reach 14th place by lap nine, with Team Engstler’s Jean-Karl Vernay (Hyundai Elantra N TCR) just ahead.

Urrutia won the race 1.2 seconds ahead of Girolami, with Vervisch completing the podium.

“I was strong here, which was the key,” said Urrutia after the race. “I made a mistake at Aragón that cost me a lot of points, but worked really hard and I have to thank my team for a great car. Now we have to continue working hard.”

Urrutia and Ehrlacher now lead the drivers’ standings tied at 101 points. Vernay is third, 14 points behind and Magnus is fourth, 17 points adrift.

The next round of the FIA WTCR season takes place at the Czech circuit of Most from the 8-10th of October.