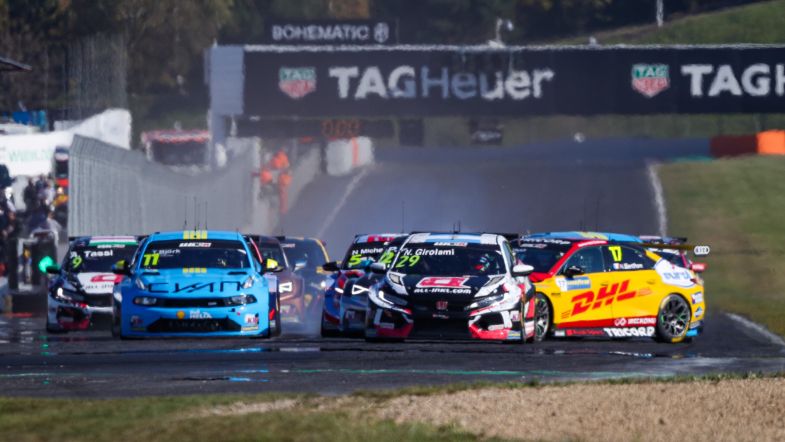 Néstor Girolami: “That was the secret to come back from that hit”

Néstor Girolami became the ninth winner in nine WTCR races after Race 1 at Autodrom Most, surviving a big hit from behind in the first corner.

“I was really worried before the start, in front of me T1 is really tight and I knew that somebody can overshoot easily from the inside line because it’s very dirty,” said Girolami.

“So I was already downshifting to first gear so that was the secret to try to come back from that hit, because I went flat out to try to recover and make it happen for T2 and it worked.”

The Münnich Motorsport driver then kept the lead throughout the race with team-mate Esteban Guerrieri right behind.

“Every time he needed me to be faster I think I responded very well to try to make that gap and not make his car under the dirty air, so this is the way that we work and at this stage we cannot fight. We had to be smart and we did it today,” said Girolami.

“But the important thing is that we were working very well in terms of how much grip was available at the start because it was completely different as before and also in the starts earlier where we take practice,” said Girolami.

“So the engineers did analysis and it worked, so thanks to them. And then during the race we tried to keep conserving the tyres. I got in info that Attila got a puncture and that was in the middle of the race and there were still five or six laps left. I tried to not complicate Esteban with dirty air so I made a gap every time the engineers asked me, but at the end I think we managed very well.