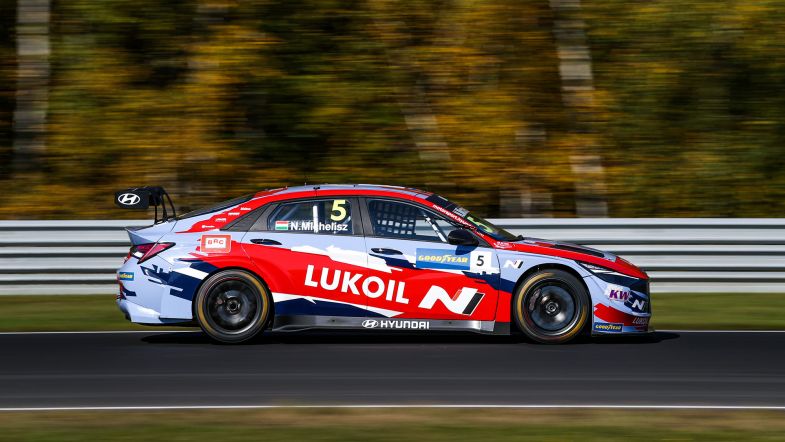 Norbert Michelisz won the second WTCR race at Most and becomes the tenth winner in ten races, a race that was suspended and restarted behind the safety car after an incident on the opening lap.

Hyundai driver Michelisz managed to get past Mikel Azcona, who made a mistake due to cold rear tyres, for the lead into Turn 1.

And there were just as in the first race a lot of incidents in the first corner on the opening lap with three cars stuck in the gravel.

Gabriele Tarquini and Santiago Urrutia made contact at the exit of the corner, leaving both in the gravel and out of the race. Rob Huff and Attila Tassi were also out after the incidents. This brought the red flags out.

Michelisz pulled out a gap at the restart that took place behind the safety car.

Azcona was able to claw back the gap, but dropped back towards the end of the race.

Esteban Guerrieri and Yann Ehrlacher was just as in the first race fighting hard, this time for the final podium spot.

Points leader Ehrlacher was close to Honda driver Guerrieri on several occasions, but unable to get past and had to settle for fourth position.

Nathanaël Berthon was able to make up for his Race 1 retirement to finish fifth ahead of Yvan Muller and Luca Engstler.

Disaster struck Race 1 winner Néstor Girolami who had to pit with an issue right at the end of the race after being hit during the restart.

Race 2 was a nightmare for former points leader Jean-Karl Vernay as well who received a drive through penalty as his team failed to lower his car in time for the three-minute board ahead of the restart.

Ehrlacher keeps the points lead on 135, heading Guerrieri by 20 points and Azcona by 26 points.

The next WTCR race takes place at Pau Arnos in France next weekend.