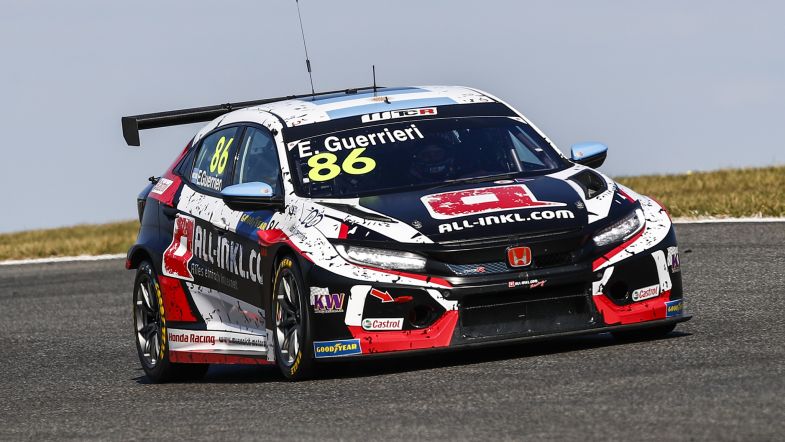 Esteban Guerrieri: “It’s good we maintain the gap to the leaders”

“It was quite a positive Sunday because we finished both races with good points and more or less maintaining the gap with the leaders, and now we are getting into the final stage of the championship, so it’s going to be intense and fun,” Guerrieri told TouringCarTimes.

The second race of the weekend saw plenty of incidents, with Guerrieri coming together with Cyan Racing’s Yann Ehrlacher and also hitting a tyre barrier at the chicane. The Honda driver believes other drivers’ problems affected his race.

“Race 2 was not easy but, with Norbi having a problem in front of us, it messed up the race a bit and made it very difficult for us,” added the Münnich Motorsport driver.

“Then everybody was attacking and Vervisch hit me in the rear tyre, then Yann went off and rejoined at Turn 4 and pushed me off, so it wasn’t an easy race. I was also aggressive but trying to be fair.

“We have to see what the stewards decide, but it was good that I finished in P7 despite all these incidents, that was a good job from the Honda team and overall I’m happy for the result.”

The Argentinean also lamented the problems for fellow countryman and team-mate Néstor Girolami, with whom he counted for his race strategy: “It was a shame that Néstor (Girolami) had a puncture as he was my wingman in this race and it was all going very well until he had to come into the pits.”

Heading to the next round of the championship at Adria Guerrieri lies in third place in the championship, 22 points behind Ehrlacher, and believes the Honda Civic Type-R TCRs won’t have an easy time at the Italian track either.

“We are heavier than the Lynk & Co. in the compensation weight and this doesn’t make it easy,” added Guerrieri. “But it depends, this weekend we don’t have the best car and Adria is not the track that suits us the best, with slow corners and having to pull through slow corners, which is not our strength, but still we will try our best.”