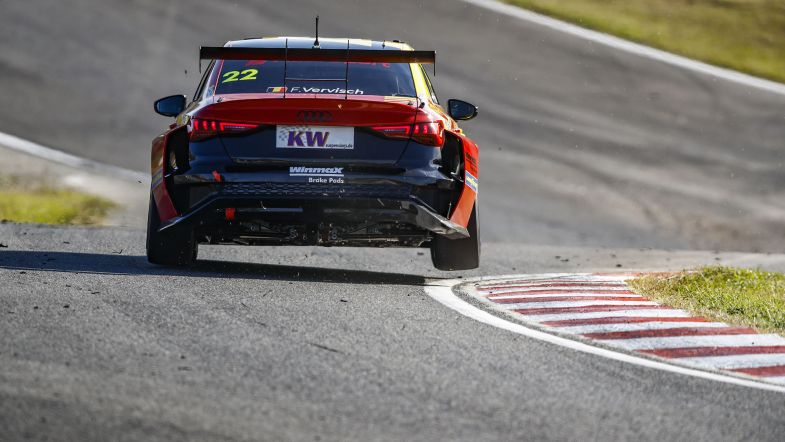 Comtoyou Racing driver Frédéric Vervisch (Audi RS 3 LMS) controlled the pack from start to finish to claim the victory in the first WTCR race of the weekend at Pau Arnos.

Cyan Racing’s Thed Björk was able to get side-by-side at the start, but let off to get back into second place before Turn 1.

Tiago Monteiro (Honda Civic) was tagged by Cyan Racing’s Yann Ehrlacher and sent into a spin at Turn 1, hitting the barriers and the safety car was called into action.

Cyan Racing driver Yvan Muller made contact with Münnich Motorsport’s Attila Tassi, with the Frenchman returning to the pits with suspension damage.

The race was restarted on lap seven with the total race distance increased to 20 laps, with Vervisch retaining the lead ahead of Björk and BRC Motorsport’s Gabriele Tarquini in third.

Cupra driver Mikel Azcona was on the move from the back, overtaking team-mate at Zengo Motorsport Jordi Gené for 14th place on lap nine, but Gené suffered a puncture and went wide at Turn 1, limping back into the pits.

On the move were also Zengo Motorsport’s Rob Huff and Team Engstler’s Luca Engstler (Hyundai Elantra N TCR), climbing up to ninth and tenth place in the first part of the race. But Huff would retire to the pits with a technical issue on lap ten.

BRC Motorsport’s Norbert Michelisz made it easy for fellow Hyundai Jean-Karl Vernay, with the Frenchman overtaking for sixth place on lap 15.

Vervisch won the race, becoming the first two-time winner of the season, with a comfortable gap over Björk and Tarquini completing the podium.

The Münnich Motorsport duo of Esteban Guerrieri and Néstor Girolami came next, with Vernay crossing the line in sixth place.

Michelisz was seventh, ahead of Ehrlacher, who is under investigation for the contact with Monteiro, with Engstler in ninth place and Comtoyou Racing’s Tom Coronel completing the top ten.

Ehrlacher still heads the championship on 149 points, 20 ahead of Guerrieri and Vernay in third, 30 points adrift.