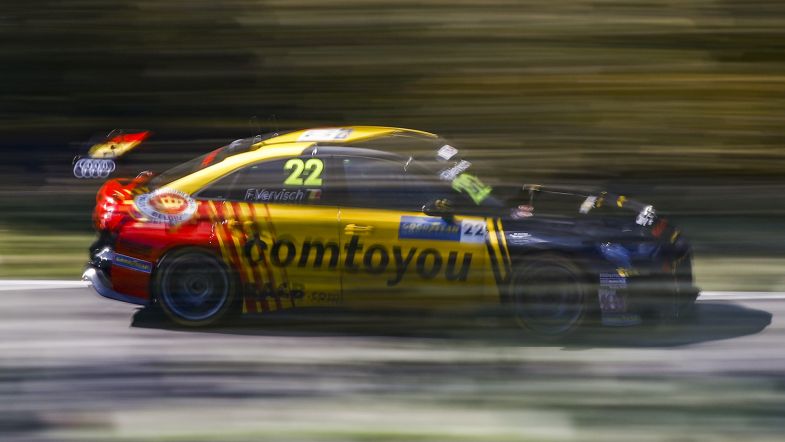 Frédéric Vervisch: “We need to be faster in qualifying”

Frédéric Vervisch completed a strong weekend at Pau Arnos with a victory and a fourth-place finish.

The Belgian however believes that fighting for the championship will be difficult unless they improve the qualifying results with the Audi RS 3 LMS.

“We didn’t have the speed in qualifying and with our weight, we are so light, we should have been much better, I’m quite straight on that,” Vervisch told TouringCarTimes.

The Belgian believes that achieving strong race results is not enough for their targets in the championship, which is a concern given the success ballast situation for Audi.

“I think the key factor of this championship to win and to manage is to be quick in qualifying,” added Vervisch.

“On the other hand, we got two very good races, a victory and a fourth place and we had good pace, specially in the race at the end, but we need something to be quick in qualifying so I hope we can find something.”

Race 2 had plenty of incidents, with Vervisch recovering from tenth on the grid to fourth place at the chequered flag.

“We had a few incidents in Race 2, so I was worried I could get a puncture or something broken,” added Vervisch.

“The car didn’t feel ok but it was ok at the end. From my feeling it was good touring car action, sometimes a bit over, but it was good racing and it’s important to not get a DNF.

“In Race 1 it was important to save the car for the second race and in Race 2 I had a lot of fun, yes, a lot of touches, but it was ok.”

Vervisch is fourth in the championship, 29 points behind Cyan Racing’s Yann Ehrlacher.

“To be honest, two races ago, when me and Magnus were P4 and P5 I thought we had a chance, because we were good in the compensation weight,” added the Comtoyou Racing driver.

“And then I had my first big disappointment in Most, we had an engine failure, but still I thought we would be quick there, but it’s still hard because it seems we cannot get that advantage in qualifying.

“So yes, we had a very good weekend, we are on points, but, at the moment, I don’t feel myself ready for the championship. Yes, I will fight and we will try, but we don’t know how much the others still have in their pockets. We need more speed in qualifying, otherwise we depend on the speed of others,” concluded Vervisch.