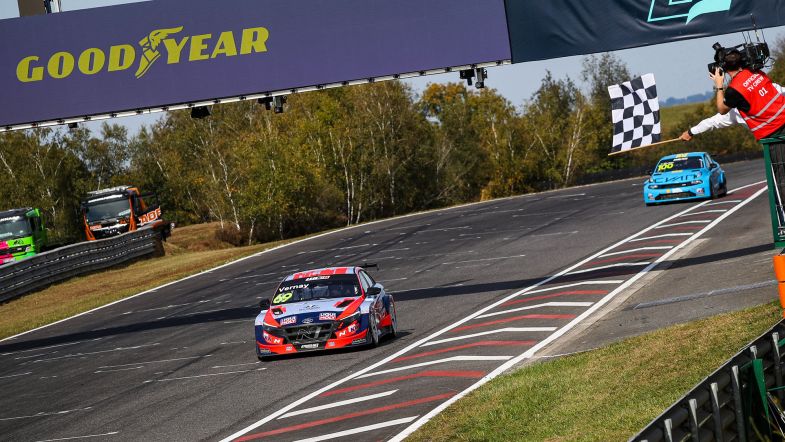 Jean-Karl Vernay: “We are back in the fight”

Jean-Karl Vernay has climbed back up to second position in the standings after a strong home race at Pau-Arnos in France, crowning the weekend with a victory in Race 2 after beating pole sitter Yvan Muller off the line.

“Yeah, was a good day overall. A lot of points. Since Nürburgring we didn’t score as many points as this weekend, so it’s pretty good,” said Vernay.

“Really consistent, good performance and yeah, we saw the Lynk & Cos were struggling in Race 1 at the start so we said OK. That was the only occasion, let’s say, to have a shot at Yvan and it happened.”

The Hyundai driver came back from two difficult race weekends at the Hungaroring and Most.

“Well, Hungary definitely we made a mistake. And Most, overall the weekend was pretty good, we just had an issue on the car,” said Vernay.

“We broke the anti-rollbar and the guys tried to do everything they could on the grid, but we were put in the car just too late and we were penalised for that. So we lost eight points. It’s a lot. But it’s like this, and now we are looking forward to the last two events and we’ll see. But at least we are back in the fight.”

While the others fought hard behind him in Race 2, the Engstler Motorsport driver was able to manage his pace while out in front.

“The car was reacting really well and then it was just a question of taking care of the car and front tyres, making no mistakes because as soon as you have a lack of concentration you can go a little bit wide and make mistakes or have punctures,” said Vernay.

“It was a long race, especially with the safety car on the last lap. You never know what can happen when the safety car comes in. Overall it was a good race.”