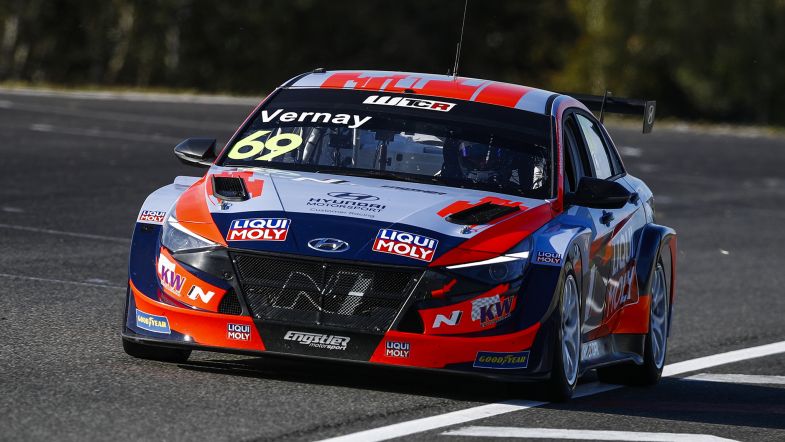 Team Engstler’s Jean-Karl Vernay claimed a lights-to-flag victory in an incident-packed Race 2 at Pau Arnos, which included a spell behind the safety car.

At the start, the Hyundai racer got ahead of Yvan Muller’s Lynk & Co to take the lead, with BRC Motorsport’s Norbert Michelisz in third place.

Vernay opened a gap at the front, with Muller coming under attack from Michelisz on lap ten, closely followed by Urrutia.

Girolami, struggling with the tyres on his Honda Civic Type R TCR, came under attack from Gabriele Tarquini on lap eleven, with the Italian overtaking for eight place and Girolami also losing out to Björk, Berthon and Zengo Motorsport’s Rob Huff.

Michelisz lost ground to Muller on lap 17, with Urrutia coming close and tagging the back of the Hyundai. The Hungarian lost ground, with Urrutia, Guerrieri and Vervisch closing in behind him. The Uruguayan received a warning for driving standards, with Guerrieri and Vervisch coming together on lap 17 and the Argentinean spinning and falling behind Cyan Racing’s Yann Ehrlacher.

The Hungarian continued struggling, falling pray to Urrutia and Vervisch on lap 18. Ehrlacher hit Michelisz on the back, with Guerrieri seeing the gap and trying a move on Ehrlacher on lap 19, forcing the Frenchman out of the track at the chicane. The Argentinean hit the tyre barrier, displacing it onto the track.

The Safety car was called into action on lap 20, neutralising the race for just one lap and with the race duration extended to 22 laps. The race was then restarted with one lap to go.

Ehrlacher tagged Michelisz, losing ground and coming under fire from Guerrieri, who also collided with the Hungarian. The Argentinean limped back to the track, going sideways before the chicane.

At the chequered flag Vernay claimed his second victory of the season, with Muller and Urrutia completing the podium.

Vervisch was fourth at the flag ahead of Ehrlacher, with Michelisz in sixth place and Guerrieri right behind. Tarquini was eighth, followed Björk and Berthon completing the top ten.

After Race 2 at Pau Arnos, Ehrlacher leads the championship with 160 points, 16 ahead of Vernay and Guerrieri 22 points adrift.

The next round of the FIA WTCR season takes place at Adria Raceway in Italy, from 5-7th of November.