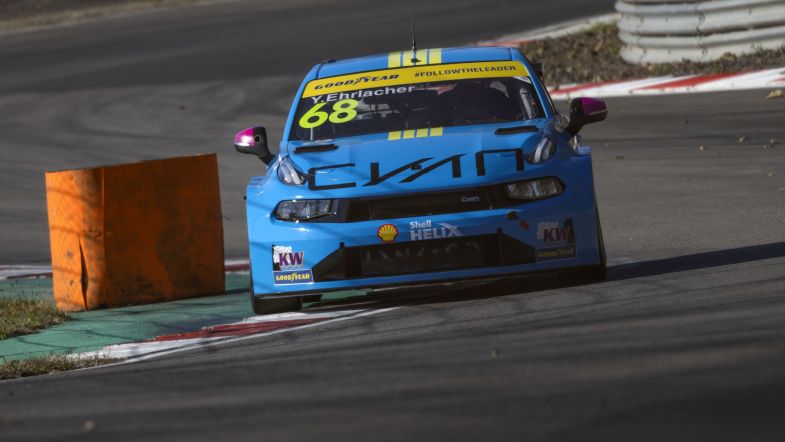 The start was eventful, with Thed Björk losing a lot of places immediately after due to contact with Magnus.

At Turn 3, a touch between Lynk & Co’s Yvan Muller and Honda’s Nestor Girolami resulted in the Argentinian sliding wide on the grass.

As the Civic TCR driver rejoined the track, Jean-Karl Vernay hit him which resulted in race-ending damage for Girolami while Vernay was able to continue after repairs, albeit a lap down.

Ehrlacher immediately started to open a gap in the lead, while Magnus and Vervisch raced hand in hand and kept fourth-placed Yvan Muller under control.

It was however Gabriele Tarquini who stole the show, as the Italian came from outside the top ten to challenge his team-mate Norbert Michelisz for sixth.

On lap 6 the Italian went past his team-mate, and three laps later a clean move on Esteban Guerrieri promoted the Italian up to fifth.

The Elantra N TCR driver was making good progress and closed the gap to Muller, but never got close enough to challenge the French driver for fourth.

Ehrlacher won the race ahead of Vervisch and Magnus. Muller was fourth ahead of Tarquini, Honda’s Guerrieri and Michelisz.

Björk recovered some ground from the contact in the early stages of the race but could go no further than eighth, finishing ahead of Hyundai’s Luca Engstler.

Rob Huff performed a strong comeback from 15th on the grid in his Cupra and completed the top ten.

Ehrlacher extends his championship lead to 35 points over Vervisch, with Guerrieri a further three points behind in third going into the final race of the season in Sochi on November 27-28.