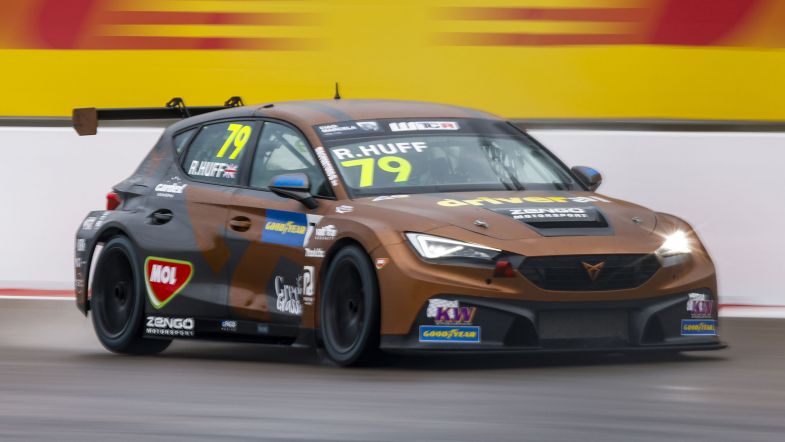 Zengo Motorsport’s Rob Huff won an incident-packed Race 2 at Sochi to end a difficult WTCR return season on a high.

The safety car was called into action before the end of the opening lap as Münnich Motorsport’s Attila Tassi and Comtoyou Racing’s Gilles Magnus collided at the start, with Magnus’ Audi RS 3 LMS stranded in the middle of the track.

Cyan Racing’s Santiago Urrutia retired to the pits with a damaged suspension after a collision at Turn 1.

The race was relaunched on lap four, with the total race distance increased to 13 laps.

Azcona accelerated as the race resumed, receiving a rear hit from Yvan Muller, who locked up the brakes and had to retire at the spot with damage. Azcona also retired to the pits with a damaged rear suspension.

“You can see the car is totally destroyed, so I’m very disappointed,” said a very upset Azcona.

“I can’t understand how a driver like Muller, with all the experience he has, could do something like this, he completely destroyed my race.”

Before the end of lap four the safety car had to be called into action again as Lada driver Kirill Ladygin hit Bence Boldzis’ Cupra Leon Competición, with the Hungarian hitting the barriers hard.

The race was restarted again on lap seven, with Girolami in the lead under pressure from Huff and Vervisch, who attacked the Briton at Turn 3.

Tassi, recovering from the back, overtook Jean-Karl Vernay (Hyundai Elantra N TCR) for fourth place on lap seven, as Huff came side-by-side with Girolami to take the lead from the Argentinian.

Vervisch came side-by-side with Girolami, who had better traction in the corners and managed to stay ahead. Tassi, meanwhile, overtook Vernay again for fourth place on lap eight, with the Hungarian closing the gap to the Belgian.

The fight for second place allowed Huff to open a two-second gap at the front as Comtoyou Racing’s Nathanaël Berthon joined the pursuing group.

Girolami made a slight mistake on lap ten, with Vervisch overtaking for second place. But the Belgian outbraked himself, with Girolami coming side-by-side.

Tassi took advantage of the scruff to overtake his team-mate for third place, with Berthon also gaining places to climb up to fourth position.

Newly crowned champion Yann Ehrlacher (Lynk & Co. 03 TCR) reached the group, bumping into Vernay’s rear on lap ten. Berthon overtook Tassi for third place at Turn 2 but went straight at the corner, sorting the run-off area blocks and returning to the track ahead of the Hungarian.

At the chequered flag, Huff claimed his first victory of the season, with Vervisch and Berthon completing the podium.

The WTCR will return to action for the 2022 season starting on the 9-10th of April at Most (Czech Republic).