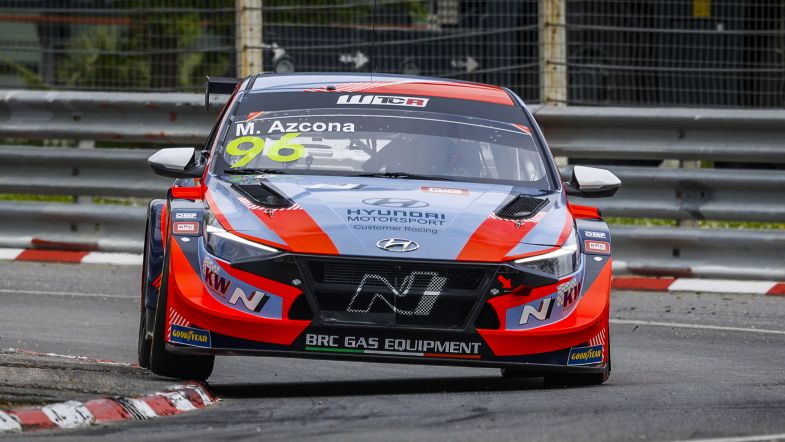 Mikel Azcona switched from Cupra to Hyundai for the 2022 WTCR and ETCR seasons, with the Spaniard adapting well to his new team and confessing to learning everyday from former champion and now team advisor Gabriele Tarquini.

“There are a lot of changes for me now at Hyundai,” Azcona told TouringCarTimes.

“The car is a long wheelbase, as opposed to the Cupra, and this has an impact on the driving style, as it’s very stable on long corners, but on tight corners I have to work on a different manner.”

“Work methodology at BRC is different,” added the Spaniard. “I was used to working in a certain manner that I’ve realised I cannot do with this car.”

Azcona has also found a good working partnership with his new team-mate Norbert Michelisz: “I work very well with Norbi and he’s been a very good reference for me, as he’s driven this car for a long time and knows how to setup the car and I’ve been like a sponge, analysing how he works and it’s effect on the track.”

Tarquini retired from active racing at the end of last season at the age of 60, moving onto an advisory role at BRC Motorsport.

“Gabriele is a very important person in the team, as he’s now performing as a team manager,” explained Azcona. “He’s been a great driver all his life and he’s like an encyclopedia, it’s fantastic working with him. I ask him a lot of questions, and he opens up and you realise the amount of information he has.

“This gives you vision, not only how to setup the car, but also how to prepare race and qualy strategies and he’s a very important person. The engineers are also very good, but he’s the driver perspective after so many years.”