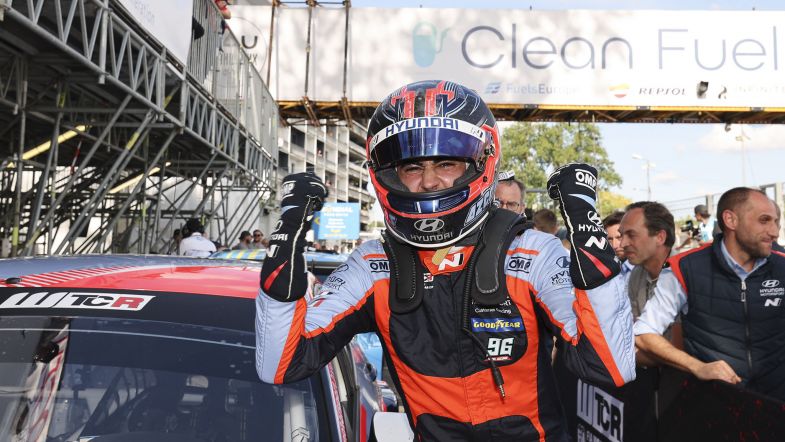 Mikel Azcona: “I pushed hard to get away from Urrutia”

BRC Motorsport’s Mikel Azcona claimed a strong victory in the second WTCR race at Pau-Ville, but the Spaniard said he did not have an easy race while trying to maintain his gap to Cyan Racing’s Santiago Urrutia.

Azcona started the race from third place on the reversed grid, but shot into the lead as team-mate Norbert Michelisz crashed into Attila Tassi.

“I narrowly avoided the accident and I nearly touched Tassi’s car and, at the start, I was looking at Urrutia, as he had started better than me and, when I looked ahead, the two cars were already bouncing back in front of me,” Azcona told TouringCarTimes.

“Honestly, with Norbi and Tassi ahead of us it wasn’t our target to achieve the victory, specially with my team-mate in first place. I feel very sorry for Norbi.”

After the safety car period, Azcona had to push hard in order to extend and maintain his gap to Urrutia.

“The first laps after the safety car, Urrutia’s car was very fast in the straights. So I had to do a strategy of getting out of the corners, for instance at Turn 13, very well, because he would then get close because of his speed,” said Azcona.

“So I pushed, especially in the second sector, and the first laps you always go on the limit. I locked the rear tyres several times and I got the radio message and we then managed the distance.”

Münnich Motorsport driver Néstor Girolami leads the standings after the WTCR round at Pau-Ville with 48 points, six ahead of team-mate Esteban Guerrieri and seven over Azcona.