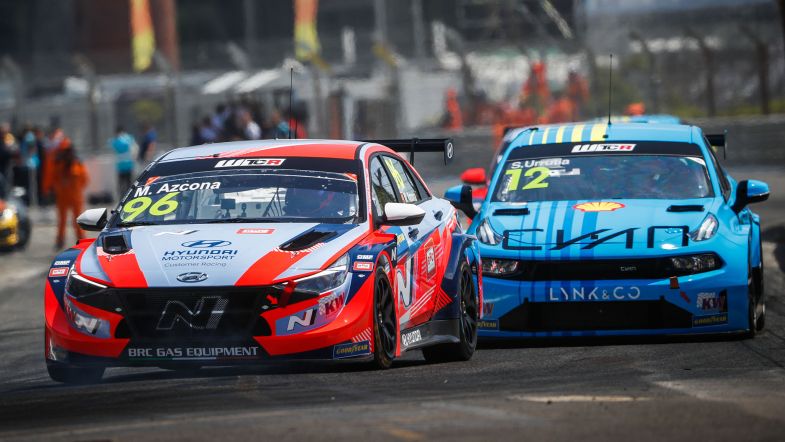 Mikel Azcona put the icing on the cake on his debut for Hyundai by winning Sunday’s Race 2 at the Pau-Ville street circuit for BRC Racing Team.

Norbert Michelisz, who was on the reverse grid pole position, was slow off the blocks and Engstler Motorsport’s Attila Tassi got side-by-side with the Hungarian. The two collided on the main straight, being narrowly avoided by the rest of the pack.

Azcona took the lead ahead of the Lynk & Cos of Santiago Urrutia, Yann Ehrlacher and Ma Qing Hua.

The safety car was called into action, with the race neutralised for two laps. At the restart, Urrutia tried attacking Azcona, but the Spaniard defended and was able to open a gap.

The positions remained stable but, on lap 12, Ehrlacher came into the pits due to a puncture, returning to the track in 15th place.

The positions remained stable for the remainder of the race, with Azcona taking his first win of the season, followed by Urrutia and Ma Qing Hua completing the podium.

“I’m really happy, first race with Hyundai Motorsport and the BRC team,” said Azcona after the race. “I have to congratulate everyone in the team for everything they have done and we can fight now this year, we have done a really good work.”

After the first round of the 2022 FIA WTCR, Girolami leads the championship with 48 points, with Guerrieri and Azcona tied in second place, seven points behind.

The next round of the FIA WTCR takes place at the Nürburgring on the 26-28th of May.