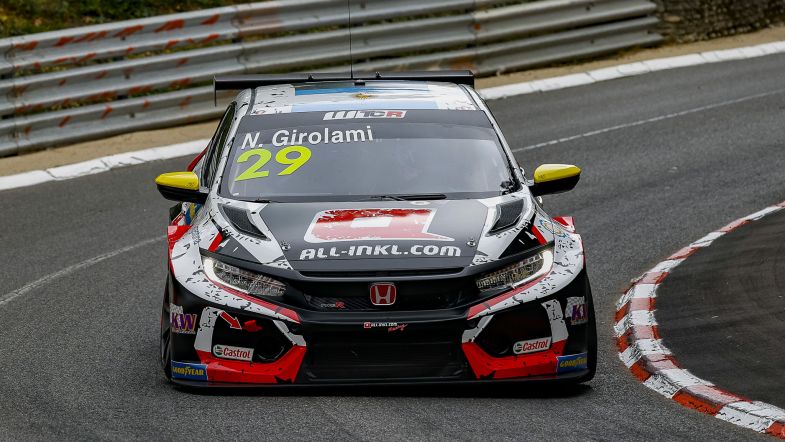 Münnich Motorsport’s Néstor Girolami led team-mate Esteban Guerrieri to a 1-2 result for Honda in the opening WTCR race at Pau Ville, where the hot conditions caused problems for many drivers.

At the start Girolami took the lead ahead of Guerrieri, with Cyan Racing’s Yvan Muller slotting into third place, ahead of Comtoyou Racing’s Nathanael Berthon.

Girolami and Guerrieri were keen on managing their cars in the conditions, with the pursuing group compacting up behind them. Zengo Motorsport’s Rob Huff, in 14th place, was the fastest driver in the race.

Ehrlacher overcame his issues to overtake Berthon for fourth place, with Ma Qing Hua also going through on lap 21. Berthon then suffered contact from Azcona, with the Frenchman going straight on and falling to the back of the pack. Both Berthon and Tassi retired to the pits at the end of the lap.

Azcona continued fighting, attacking Ma on the final lap, but the Chinese driver fended off the Spaniard.

Girolami took the victory at the chequered flag, leading his team-mate Guerrieri for a Münnich Motorsport 1-2. Muller completed the podium.

Ehrlacher managed to finish fourth, ahead of Ma and Azcona. Cyan Racing’s Santiago Urrutia finished in seventh place, ahead of a recovering Magnus. BRC Motorsport’s Norbert Michelisz was ninth, ahead of Comtoyou Racing’s Mehdi Bennani, who completed the top ten.

“I want to congratulate all the team who did a fantastic job,” said Girolami after the race. “We approached the first corner together with Esteban and then I took care of the car. I tried to avoid the kerbs to avoid tyre damage.

“It’s a great result because it’s the fourth year that the team trusts me and it’s great to start the season like this,” added the Argentinean.