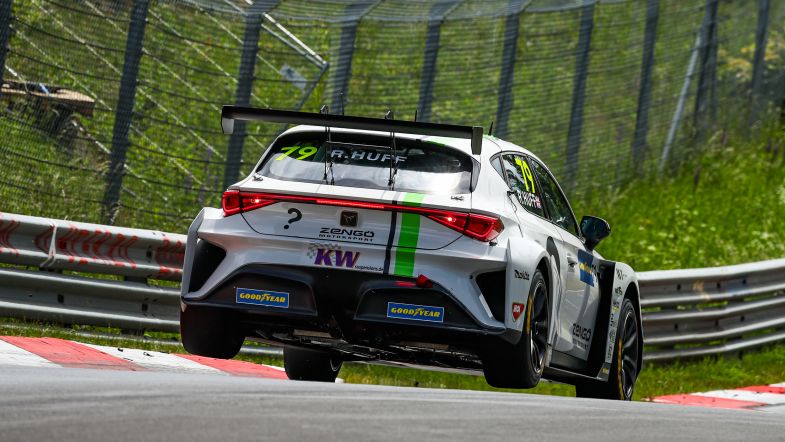 The Briton was on his second run in the session when the incident took place and saw his Cupra clatter into the barriers.

“[It was a] nasty crash and all from the vibrations from the rear tyres,” said Huff.

“At the beginning of the lap I had a bit of a vibration and it just seemed to get worse and worse and worse. I knew it was my last shot and of course the racing driver inside of you goes, you got to keep pushing, you got to try and beat the lap time you’ve done already.

“And I think the wiser old man that is starting to come through was sitting on the other shoulder going, you should really just lift out of this and admit defeat, that today is not your day. Frustrating, because I think we had a car that could have been capable of doing 51s and being in the mix.”

Huff was improving on his first lap time before going off at the high-speed Metzgesfeld corner during his second attempt, ending up in 12th position.

“Unfortunately that resulted in quite a big crash. I’m just fine, the boys are busy repairing the car. No chassis damage which is great news, just a lot of cosmetic damage.”

The Cupra driver is one of multiple drivers experiencing tyre issues this weekend and Huff is scratching his head over the issue.

“Speaking openly, no one seems to be able to understand what the problem with the tyre is,” said Huff.

“We can only assume it’s a construction problem which isn’t happy with the new surfacing here at the Nordschleife.

“We are looking at other teams and they are having far, far bigger problem than us. But we got unlucky where it happened with us and the result. The car will be ready for tomorrow. I’m not sure what tomorrow will hold for WTCR, but let’s see what happens tonight.”