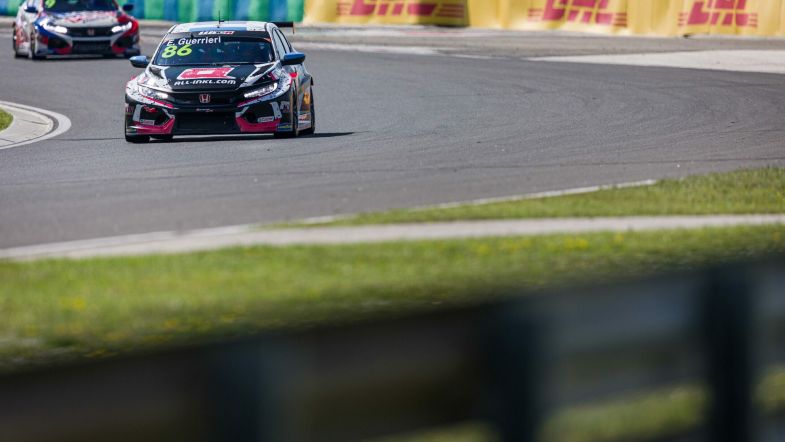 Münnich Motorsport’s Esteban Guerrieri aims to ‘fight with a heavy car’ after losing his qualifying run due to a track limits infringement in Q3.

The Honda Civic Type-R driver arrived in Hungary with 40kg of compensation weight following the opening weekend of the World Touring Car Cup season at Pau, but still impressively made it into the final segment of qualifying on Saturday.

Guerrieri had looked to make it towards the front row of the grid in Q3, with the Honda showing more pace than expected throughout the timed running, but made a slight mistake and ran wide.

The resulting track limits infringement cost Guerrieri his lap-time and means he starts fourth on the grid, one place ahead of Comtoyou Racing’s Gilles Magnus who also fell foul of the track limits.

Despite the disappointment of losing his best time, Guerreri said his qualifying gave him a chance of a good showing in the races.

“A top five is a good result, but at the same time I’m a bit disappointed with my approach in Q3,” he said.

“I thought the guys who were in front of me in Q2 would aim for a 1m51.6s, something like this, and I needed a couple of tenths from Q2 to make that time”

Knowing he was lumbered with the additional weight versus his rivals, Guerrieri’s approach was full attack, which failed to pay off.

“I went for it but it didn’t work – I got my rear tyre down from the kerb and there were track limits at that corner and I just exceeded them.

“Tomorrow, we’ll try to make a good start and then just fight with a heavy car, which will not be easy. Let’s see how it goes.”