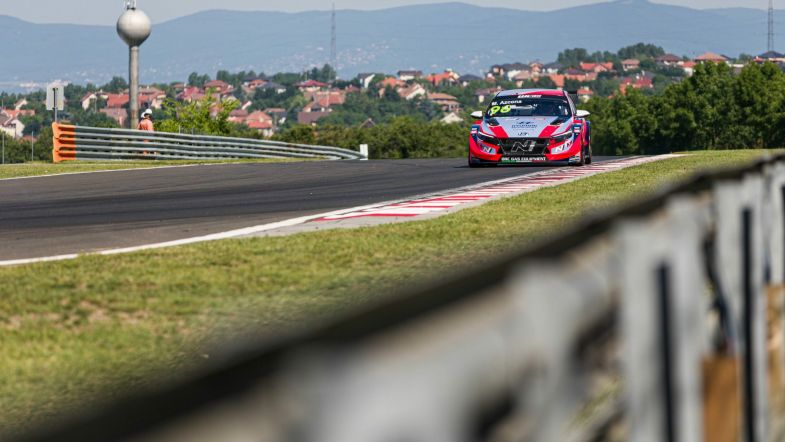 The Hyundai Elantra N TCR driver was the second to run in the one-shot third segment but made the most of deleted lap-times for both Esteban Guerrieri and Gilles Magnus to secure top spot.

“That was very tough, everything is very close but I am really happy for the team because we are working so hard,” Azcona said post-qualifying.

“The car was working very well today, and we need to use this opportunity to take points for the championship.”

With pole position, Azcona took 10 points to close the gap to championship leader Néstor Girolami, who could only manage seventh on the grid, to just two points ahead of Race 1

Münnich Motorsport’s Néstor Girolami was the first driver to set a benchmark time of 1:52.429, a mere nine-hundredths of a second quicker than the BRC Racing Hyundai Elantra N TCR of Mikel Azcona.

Three-thousandths further back in third came Girolami’s team-mate Guerrieri as the Hondas showed strong in the opening segment.

Local hero Michelisz had been as high as fourth early on but dropped to 13th in the standings as others improved. But the Hyundai driver got back into the mix with a superb effort to second quickest in the final 10 minutes, just under half a tenth behind Girolami, whose improvement bumped erstwhile leader Azcona back to third.

Nathanaël Berthon was another to languish down the order in the early stages but the Audi RS 3 LMS TCR looked the part by going third ahead of Azcona with five minutes remaining, despite complaining of a skittish rear after his first effort.

Making the cut into Q2, Gilles Magnus survived a scare as the Comtoyou Racing Audi had two lap-times deleted for exceeding track limits. He finished Q1 in 10th, ahead of Yvan Muller and Dáni Nagy, while FP1 pacesetter Thed Björk missed out in 13th.

Q2 effectively became a one-lap shootout after a crash for Dáni Nagy under braking for the first corner caused a lengthy red flag stoppage. He lost his time and will start the opening race form 12th on the grid.

With dark clouds menacing overhead, the field headed out for an out-lap and flyer with Magnus going fastest from Ehrlacher by just three-thousandths of a second.

Berthon was third after the early run, while Huff was forced to abandon his first attempt after running too deep towards the end of the lap.

Of the Lynk & Cos, only Ehrlacher made it through to Q3, but Urrutia will start from Race 2 after setting the 10th quickest time. Michelisz managed seventh, but will start 13th after his six-place grid penalty from Pau is applied.

Magnus, Ehrlacher, Berthon, Azcona and Guerrieri made it through to the final, one-shot, segment of qualifying, with Guerrieri first out on track.

The Honda ran wide at turns five and 11, forcing the stewards to strip it off its time for abusing track limits and relegating it to fifth on the grid.

Azcona was next up and set a best time of 1:52.020, which was just over a tenth of a second quicker than the Audi of Berthon.

Ehrlacher couldn’t match either Azcona or Berthon and only managed