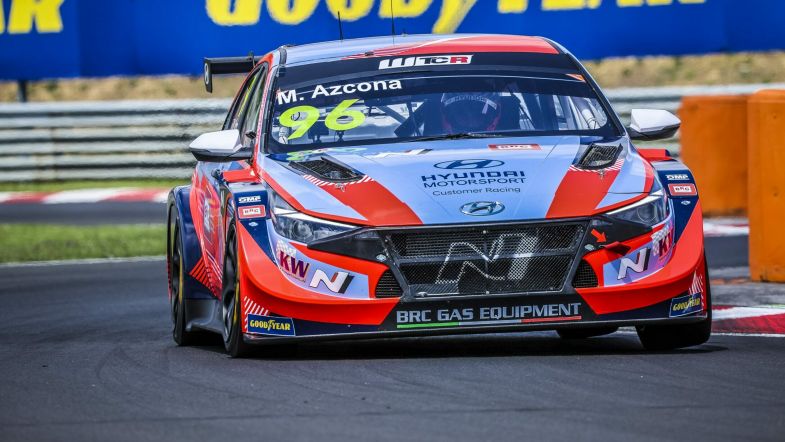 BRC Racing Squadra Corse’s Mikel Azcona said he thought it was ‘game over’ after a mistake on his pole position lap for the opening WTCR race at the Hungaroring.

The Hyundai Elantra N TCR driver was one of just three from the five who made it into the one-shot final segment of qualifying to have a lap count, as pole contenders Esteban Guerrieri and Gilles Magnus both lost their efforts due to track limits violations.

By bagging pole position, Azcona has recouped ground in the points standings, taking 10 points to close the gap to Néstor Girolami to just two ahead of the race tomorrow.

“Everything is very close and we are all together, but I’m very happy with this first pole position of the year,’ Azcona said. [I’m’] very happy for the team because we are working so hard every single day. The car was working amazingly and we need to use this opportunity tomorrow to take the victory.

“I know it is not going to be easy, but we will use this opportunity and look for the championship as well which is so long.”

Azcona also admitted that he thought he had ruined his chance at taking pole after making an error at the chicane on his flying lap.

Thankfully for the Hyundai driver, it was enough to put him ahead of the Comtoyou Racing Audi of Nathanaël Berthon and the Cyan Racing Lynk & Co of Yann Ehrlacher.

“I was a bit disappointed after I did a mistake at the chicane because I said, OK, it’s game over,” said Azcona.

“I’m sorry for Esteban and Gilles that they lost their laps to track limits. But in the end it’s a really good result for us. Starting on the pole position for the first race we want to try to lead and finish on the podium at least, looking ahead to the championship.”

Race one is scheduled to take place tomorrow morning at 11:30 CEST.