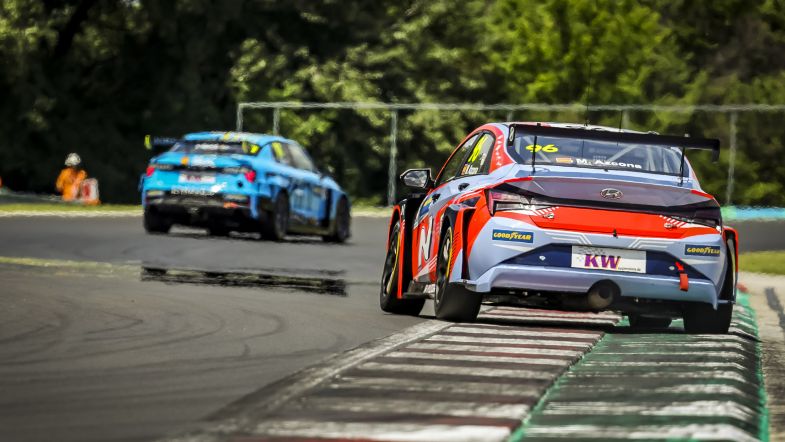 Yann Ehrlacher: “Mikel is one of those drivers who is quite offensive”

Reigning WTCR champion Yann Ehrlacher claimed his so far best qualifying result of 2022 with third at the Hungaroring and will line up behind pole sitter Mikel Azcona, a driver the Frenchman says he is expecting a tough fight from.

“We all want to deliver our best and be as far up front as possible in the races, and Mikel is one of those drivers who is quite offensive for some… how to say in a political way? – nice contact and nice racing for the spectators, so it will be fun,” said Ehrlacher.

“He will provide great entertainment for you, not sure for us.”

While Ehrlacher secured third on the grid, he was over three tenths behind Hyundai’s Azcona.

“It’s a difficult track, it’s really tough when you are on the edge as we saw with track limits mistakes, just braking two or three metres later or earlier you are off the pace completely and then you lose four or five positions,” said Ehrlacher.

“This repeating on 10 or 15 corners, it is really not easy, in three qualifying in a row. It is something tough and shows as well how close the competition is in this championship. We will see. For sure we want to optimise the chance for Cyan Racing and Performance to be champion at the end of the year, that’s our main focus and target.”

The new “enhanced” specification Goodyear tyres performed well under the hot conditions during practice and qualifying, but it will be key to manage tyre wear during the races according to the Cyan Racing driver.

“With this temperature the tyre management will be quite crucial, so that will be our focus tonight to optimise our race pace as much as we could and to have as many points as possible because we are looking for points now,” said Ehrlacher.

“From the beginning of the season we didn’t have the opportunity to score anything, about the qualifying points at the Nürburgring, in Pau we missed Race 2 while running P3 with a puncture. So we need points now and it’s time to be back.”