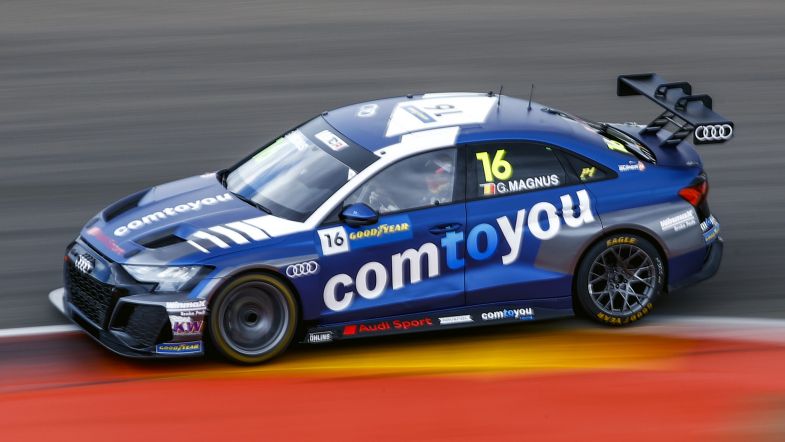 Comtoyou Racing’s Gilles Magnus took a lights-to-flag victory in the first FIA WTCR race of the weekend at Motorland Aragón, having to defend from Zengo Motorsport’s Rob Huff during the whole race.

Cyan Racing’s Yann Ehrlacher challenged Comtoyou Racing’s Nathanaël Berthon for second place at the start, but it was Huff who went for the Lynk & Co driver’s inside, taking second place at Turn 2.

Further back, the Hyundai drivers were also on the move, with Mikel Azcona and Norbert Michelisz overtaking Cyan Racing’s Santiago Urrutia to climb up to sixth and seventh positions respectively early on.

Zengo Motorsport’s Dániel Nagy lost two places at the start and fell into the grips of Cyan Racing’s Thed Björk, on the move after power steering issues marred his qualifying efforts on Saturday.

At the front, Huff didn’t waste time and closed the gap to race leader Magnus on lap two.

Ehrlacher meanwhile fell back after contact with Berthon, also losing a place to team-mate Yvan Muller and later to both Hyundai drivers.

Nagy lost some bodywork pats at the main straight on lap five, with the drivers behind him moving to avoid the debris. The Hungarian would later park his Cupra Leon Competición in the pits due to a tyre issue.

Cyan Racing’s Ma Qing Hua and Comtoyou Racing’s Tom Coronel came together at Turn 15 on lap seven, with the Dutch driver losing two positions and the incident will be investigated by the stewards. Coronel retired to the pits two laps later.

At the front, Huff continued pressuring Magnus, with Azcona also closing the gap to Berthon.

Further back, Muller let Ehrlacher past for sixth position while the team gave orders to Urrutia to remain behind.

Azcona continued attacking Berthon for third as the Hyundai team advised Azcona to take no risks and look after the tyres.

Azcona tried Berthon’s inside on lap 12 at Turn 16, with the Frenchman defending to keep third place.

Magnus took the victory by a margin of just four tenths ahead of Huff. Berthon completed the podium, with Azcona in fourth.

Michelisz was fifth, followed by the Lynk & Co trio of Ehrlacher, Muller, Urrutia and Björk. Bennani recovered positions to cross the line in tenth position, ahead of championship contenders Guerrieri and Girolami.

Azcona continues to lead the championship with 101 points, eight ahead of Magnus and 22 over Ehrlacher.

Race 2 at Motorland Aragón is scheduled for 15:15 CEST.