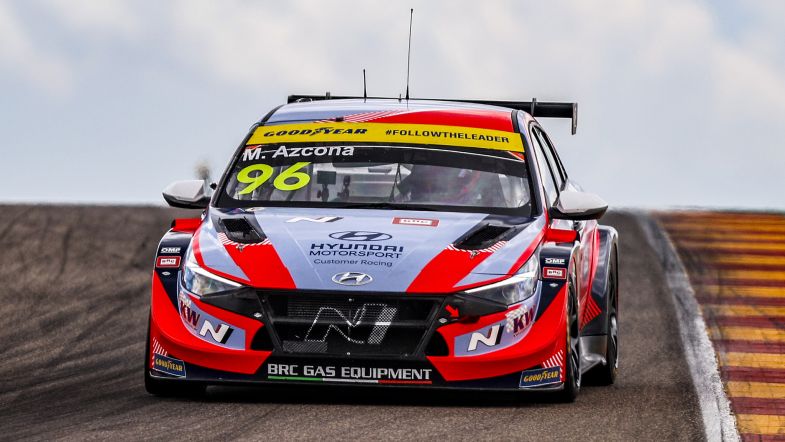 BRC Motorsport’s Mikel Azcona claimed his third victory of the WTCR season at Motorland Aragón after an incident packed second race that included a spell behind the safety car.

At the start, Ma Qing Hua defended the inside line, with the Hyundais of Norbert Michelisz and Azcona right behind. Michelisz didn’t waste time and overtook for the lead, but the Hungarian would hit a tyre stack, with Comtoyou Racing’s Tom Coronel also involved in the aftermath and with his Audi RS 3 LMS heavily damaged.

The safety car was called into action as both drivers had to retire from the race, leaving Ma in the lead followed by Zengo Motorsport’s Dániel Nagy, Azcona and Zengo’s Rob Huff.

“I had the outside going up the hill and then I had a hit in the rear, and the car just didn’t respond anymore,” Michelisz said after the race. “I have to see the images.”

The race was relaunched on lap three, with Nagy launching himself at the inside of Turn 1 to take the lead ahead of Ma and Azcona. The Spaniard overtook the Chinese driver to take second place, with Huff and the Lynk & Cos of Yvan Muller, Santiago Urrutia and Yann Ehrlacher close behind.

Azcona overtook Nagy for the lead on lap five, with Huff also going pass Ma for third place, and with the Briton closing the gap to his team-mate. Huff would gain second place on lap six.

Further back, Ma continued losing ground, with Urrutia overtaking his team-mates to climb up to fourth place, with Ehrlacher also overtaking Muller for sixth. Urrutia overtook Nagy for third place a lap later, with Ma receiving orders to allow Ehrlacher through.

At the front, Huff continued with his good form to close the gap to Azcona, as Nagy defended as he could from Ehrlacher and Ma, with the Frenchman overtaking his team-mate for fifth place. Further back, Muller received a warning for swerving on the straight to defend from Comtoyou Racing’s Mehdi Bennani. Bennani tried all angles on Muller during the last lap, with Huff also closing the gap to Azcona.

Azcona took the victory at the chequered flag, with Huff in second place and Urrutia completing the podium.

After the fourth round of the season at Motorland Aragón, Azcona leads the championship with 126 points, 29 ahead of Comtoyou Racing’s Gilles Magnus and 33 over Urrutia.

The next round of the FIA WTCR takes place at the Vila Real street circuit on the 1-3rd of July.