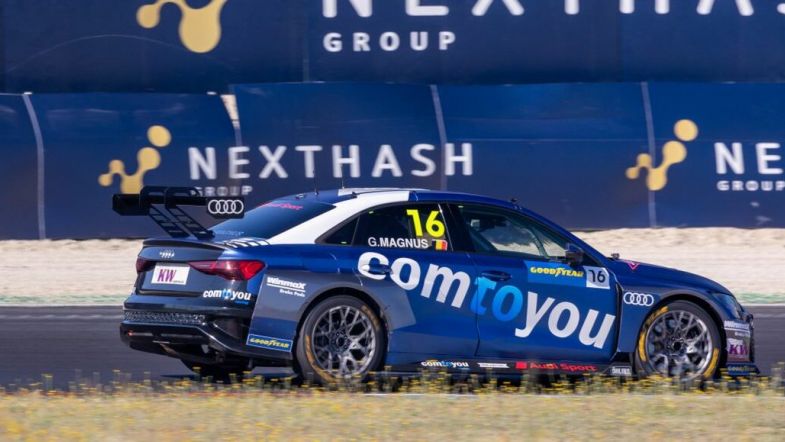 Just as during the morning race, tyre failures were part of the afternoon race and the Lynk & Co Cyan Racing drivers pitted after the formation lap.

Magnus and Bennani scrapped for the lead at the start, allowing Honda driver Attila Tassi to sneak past the Moroccan driver who soon was passed by Nathanaël Berthon as well.

As Azcona sat at the back of the five-car leading group, Norbert Michelisz was leading the rest of the field ahead of Honda trio Esteban Guerrieri, Néstor Girolami and Tiago Monteiro.

On lap 8 Mehdi Bennani suffered what seemed to be another tyre issue at the high-speed Turn 2, with Tassi soon following suit and going into to the pits from the top fight to change tyre.

At the end of lap 15 Tiago Monteiro also pitted his Honda to change his front left tyre. And just as the final lap was about to begin, Guerrieri pitted for a tyre change.

Magnus won the race in style, leading an Audi 1-2 with Berthon in second.

Rob Huff, who put pressure on Guerrieri at mid-point of the race, finished sixth in his Cupra ahead of Tom Coronel. Tassi was best placed among the drivers who had to pit for tyre changes in eighth position, finishing ahead of Bennani, Guerrieri and Monteiro.

Azcona has extended his championship lead to 200 points, heading Girolami by 36 points and Huff by 52 points.

The next WTCR race will take place at Anneau Du Rhin in France on August 5-7.