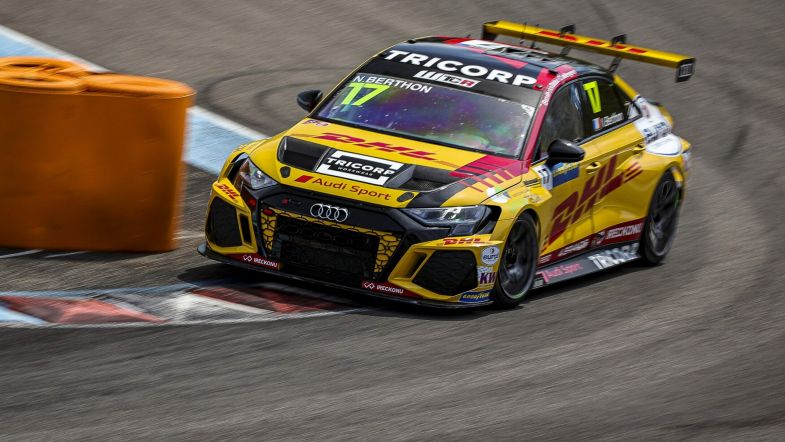 The Audi RS 3 LMS driver posted a best time of 1:26.566 to finish the 45-minute session just over a tenth of a second ahead of BRC Squadra Corse Hyundai’s Norbert Michelisz.

Michelisz had been the pacesetter early on in the session, initially posting a time of 1:26.717 before a 10-minute red flag stoppage to clear the circuit after a number of off-track excursions.

One of the drivers testing the limits of the tight and twisty French circuit was Berthon’s Comtoyou Racing team-mate Gilles Magnus who admitted to “finding the limits” during the early going.

Once action resumed, Michelisz led the way ahead of Azcona, who recovered from a bizarre off-track moment where he told his team that “the car just turned off” as he was approaching the sweeping right-left section towards the end of the lap.

The Hyundai was running behind Michelisz before it slewed through the gravel, thankfully avoiding the tyre barrier before returning to the pits.

Despite this initial setback, Azcona’s pace was strong and he set the joint-best second time along with Berthon, a mere two-hundredths of a second off the top time.

Berthon then fitted new tyres for the final five minutes and duly set the fastest time on his last run, going ja tenth and a half quicker than Michelisz.

The session was brought to something of a premature ending as Tom Coronel spun his Comtoyou Racing Audi into the turn six gravel after dipping two wheels onto the grass approaching the corner with two minutes left.

Magnus ended the session fourth fastest ahead of the best of the Honda Civic Type Rs, Attila Tassi while Mehdi Bennani was sixth.

Coronel finished seventh, despite his last-minute incident, with the Zengö Motorsport Cupra of Rob Huff ninth ahead of Néstor Girolami.

Esteban Guerrieri was 10th quickest, while Dáni Nagy and Tiago Monteiro rounded out the top 12.

Next up for WTCR is second practice, which is scheduled to take place at 12:30 CEST.